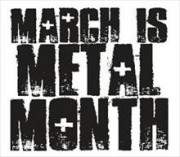 Maybe it’s because March is rather boring, or because Metal music kinda rocks, or that they both just happen to start with the letter “M”, but no matter, metal fiends, March is indeed Metal Month, at least according to the marketing team at EMI Music’s Label Services/Caroline Distribution who dreamed it up.

A special MMM CD sampler featuring the anticipated pre-release tracks from Winds of Plague, Cradle of Filth, Agnostic Front and Kill Corps, will be available at select retailers.  There are also limited edition T-shirt designs by artist Rich Hall, prize giveaways from labels including Season of Mist, Earache and Candlelight at MMM participating retailers. Century Media artists Suicide Silence and Rockstar will also be contributing two tickets to this years’ Rockstar Mayhem Festival for lucky winners of the “Show Us Your Metal” campaign via the Web site Metal Sucks.

Find out more about March is Metal on their Web site, or find them on Facebook and Twitter.