10 rock songs to inspire social change for the better 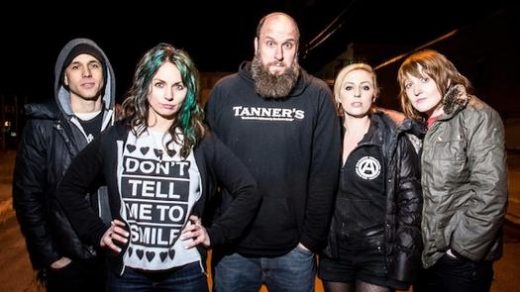 Now that the 4th of July has come and gone and the light beer and rockets red glare has faded, hopefully anyone who was  distracted by imperialism’s big huzzah can get back to remembering that protest is patriotism and that things are hella effed up right now. Did you see the G20 debacle? America is a laughingstock to the world right now.

Here is a list of ten songs to jam loud that pack a punch and are motivating as some of us try to stave off the new Dark Ages. : )

Body Count’s “Black Hoodie” is the best song on their newest banger of an album Bloodlust. Ice-T sets the tone right out of the gate with his chilling spoken intro: All these people out here tripping off police brutality like this shit is something new/Give me a f*cking break/I’ve been talking about this shit for over 20 years.

War On Women’s “Say It” is an anthem for rape survivors. Arguably the most important band in punk these days, WOW have only gotten more vital by confronting sexism at Warped Tour, advocating for inclusivity and making people feel they can shout for respect.

Boysetsfire’s classic opening track from the now over a decade old Tomorrow Come Today is sadly still as relevant as ever. Protest IS patriotism. Anyone who says otherwise is not your friend. The evil that you feed improves economy, for the rich that run your campaign! Increase the bottom line, your role again defined, Out with the old and in with the same!

“Unfuck The World” from Prophets Of Rage hits with the urgency of some of the most classic Rage and has some of the best guitar work from Tom Morello in awhile. This tune needs to be blasted all Summer.

STYG’s “Amber” remains not just a huge pit starter from one of the best live bands in hardcore but a motivator for many kids who need a rally song for beating depression and suicidal thoughts. When you feel like you are drowning slow, this song reminds that you don’t have to be alone.

Cliterati kick so much ass and their “Make America Hate Again” cuts through the noise and reminds what the motivating factors of the bullshit MAGA rallies were really about, an undercurrent of victim blame, violent rhetoric and racism. How can you look at Trump and Obama and think that Obama divided us more? Y’all are tripping. Anyway, this band rules.

Limp Wrist pushed queercore more prominently into the scene and still matter in a time when some morons still associate gayness with weakness. Play them this and scare the shit out of them.

Brujeria were not fooled by Trump’s motivations and “cut” through the racism with this xenophobia destroying total crusher of a death metal jam, “Viva Presidente Trump!”

Walking Bombs is my solo/collaborative band and I had an awesome time writing a heavy Trump protest tune for a recent Peace Quest EP with Surmiser’s Jay Anderson, NYC scene bassist Laurie Safdie – her bassline crushes- and the noise architect GRIDFAILURE (with whom a full collab album is also on the horizon, fyi!). It helped slightly to know once the horror of the election unfolded that I had at least gotten to scream at the top of my lungs that Trump is a threat.

OTEP’s “Equal Rights Equal Lefts” has become one of her biggest pit starters with plenty of funny and right on lines shredding critics: I put you on blast and fucked your wife. Love is love, it can’t be stopped.