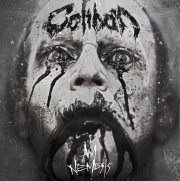 So I heard Dein R3.ich and immediately my heart rate spiked. They gave us that one for free last month and for weeks that has been fueling my everything. Prior to that, we got a blackened blood soaked church clergy and band in the music video for Memorial. And that was it. They didn’t give away the farm before the release and they loaded you up if you stepped to the deluxe version, which is all covers and a glitchy remix of Edge of Black. Songs include Motley Crüe’s Shout At The Devil and the Misfit’s classic Die, Die My Darling. I was on Caliban overload until I separated the two sides and turned the shuffle off. It was then I realized that We Are The Many opened this minefield moshgasm up.

The opening track features Marcus Bischoff of Heaven Shall Burn and Mitch Lucker of Suicide Silence on guest vocals. I was super pumped to hear from Bischoff, whose voice is equivalent to an AR-15 with a chainsaw attachment ripping through your skull after 6 consecutive head shots. Yeah, the guy has chops. Also on this track, and several others, As Blood Runs Black provides the gang singing. I’m going to pause and let you imagine that recording session with all those creative brain brain waves bouncing off each other. A sad rarity in metal, but very delightful collaboration.

Other highlights were Davy Jones, which was guitarist Marc Görtz, for which he wrote the lyrics. Görtz is also the primary music writer for the band and delivers a devastatingly direct album. Closing out the CD was definitely my favorite, Modern Warfare. definitely incorporating some serious Muse-esque melody and arpeggiated harmonies into the face arson. Melody seems to haunt this album, more than make an offensive and overdosed presence. I Am Nemesis has some nice textured effects and accents, but nothing too invasive, like someone who is showing off their new synthesizer this album. Crisp and clean, without distracting form the band.

I am definitely into this album right now and it has some serious replay value due to the high-intensity drums delivered by Patrick Grün and Görtz’s engaging and energizing guitar gauntlet. The gang singing always gets me and both vocalists have perfected their blend of styles. I really couldn’t find anything wrong or disappointing with this album. And the cover is super disgusting too.

Check out We Are The Many.