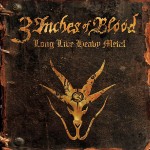 Defenders of true metal 3 Inches Of Blood are streaming their entire upcoming album called Long Live Heavy Metal.  The album is scheduled for release March 26 under Century Media.  You can listen to the new album right here.

This is the follow up to 2009’s Here Waits Thy Doom and is the band’s fifth studio release.  Vocalist Cam Pipes was recently quoted as saying the following about the album:

“All of us have a special feeling about this one. We’re more committed than ever to the cause of real, honest, no bullshit heavy metal. No trends, no fucking around!”

3 Inches Of Blood are currently touring in support of the album on the Metal Alliance 2012 tour along with Devildriver, The Faceless, Job For a Cowboy, Dying Fetus, Impending Doom, and Wretched. For dates and more info on the tour click here.