’68 release ‘Give One Take One’, perhaps the best album of their career? 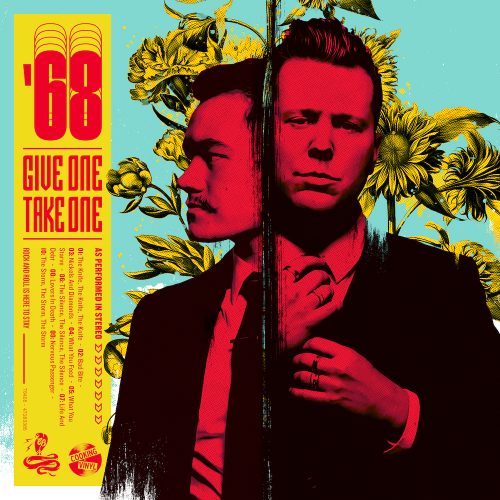 With simply one listen to ’68’s thunderous opening track “The Knife, The Knife, The Knife” from new (third) record Give One Take One you will know you are not only witnessing a special moment in the band’s development into something even more formidable but it is also very obvious that this crowd pleaser in waiting for live shows is destined to be a complete free for all when people can enjoy raging to it safely.

Produced by Grammy-winner Nick Raskulinecz (Foo Fighters, Rush, Alice In Chains) has managed to help coax the band into catchier territory that renders them even more anthemic without losing ANY of their immediacy. Few bands out right now could pull off what “Life And Debt” does without sounding overly earnest or self-conscious.

Give One Take One combines the band’s penchant for two man carnival showmanship with higher than ever octane Black Flag meets Blues Explosion spiritual adrenaline highs. The whole thing leaves competition in the dust and shows better than ever the insane chemistry of this duo.

Josh Scogin grew by leaps and bounds as an entertainer during the reign of the fabulous and chaotic post hardcore band The Chariot (who surpassed Norma Jean in quality quite rapidly). ’68 however continues to stake a claim for the most theatrical project from Scogin yet, which is saying something! Nikko Yamada is unstoppable, combining Lightning Bolt-esque jaw dropping feats of daring with finesse and groove and a very adept talent for knowing when less is more and more is even more.

Speaking on the album release, Scogin said:
“This album has been a long time coming. We recorded in the summer of 2019 and had to sit on them until now, the next step in to see these songs fulfilled live. I’m hoping that comes sooner than later.”

He further commented on the creation of the documentary:
“While we sat in limbo during the 2020 shutdown, I gathered all my footage that I had and created a documentary. It was mostly done for fun, to keep me from losing my mind because I’m not good at sitting idle.  The end product shows a small glimpse into the world of ‘68 and how winging it by the seat of your pants can be a real adventurous way to live.”

Seriously, this record is pure rock’ n roll, about as good as it gets in 2021 or any year.