90’s sludge n rollers Mearth are back on the scene

Mearth from New Paltz, NY never quite got their due the first time around (despite CMJ buzz). The band was kind of like the East Coast equivalent of The Jesus Lizard on hardcore punk and rock n roll steroids and were mainly active in the 90’s Hudson Valley, NY rock scene. I played many a show with these guys and my old bands Melancholy and Fuse alongside Shabutie (pre-Coheed & Cambria), NYC’s Dripping Goss (feat. Brian who played in Warzone), apocabilly band Pitchfork Militia and prog alternative band Three (later on Metal Blade). We had a fertile scene. Mearth played with bands like Agnostic Front and Fugazi their first time around.

Mearth was and remain the rowdiest of the 90’s Upstate, NY bunch in some ways, a caterwaul of chaos and flying beer who just couldn’t be stopped (except by things like having children and careers eventually). Now, the band are thankfully back (with Doug E. Beans of old school Murphy’s Law fame on drums). Their sound was ahead of the curve and would fit in well with a lot of stuff going on now from bands like Torche, Hark and Enabler’s ilk. Get used to reading about them cuz I am gonna keep plugging them hard as long as they remain re-activated.

Bassist Jim DeGrassi: When we got together, we were just a bunch of college kids who wanted to play some heavy music.  I don’t think we ever had any specific goals in mind regarding our sound, other than to play the kind of music we ourselves would want to listen to.  I don’t know whether or not we were ahead of the curve, but I do think our sound evolved into something unique that people seemed to enjoy.

Click HERE for more and to hear their song “Can”. 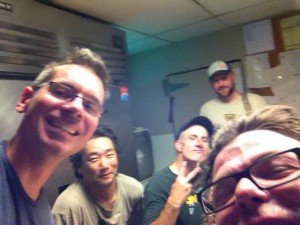 Vocalist Ryan Cronin: I’d say it feels really good to be back at it.   Over the years we were not playing as mearth, I had plenty of time to listen to the material we’d recorded and always felt we had a good thing going. It was something uniquely our own, which In my opinion is an accomplishment itself. When we were asked to play a 20 year reunion show in New Paltz, it was awesome to see the guys really psyched to play, to play just for the sheer enjoyment and fun of it all. We had so much fun, we decided to keep it going.   The boys continue to write ass kicking material, so that is a great motivator. To keep writing new material and reworking some older stuff feels right..