I was minding my own business on Tumblr, when I came across a cross-post from record label A389’s Instagram onto their Tumblr. 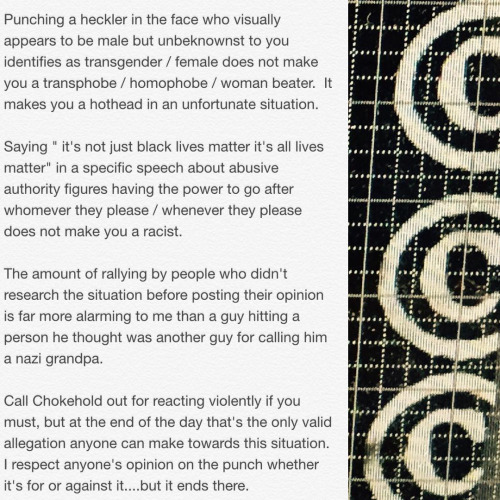 I was only half-interested but I couldn’t help but to be interested when I read the words ‘transgender’, ‘transphobe’ and ‘black lives matter’ amongst others.

The first thing I did was to email the band. I found out first of all that despite Absolute Punk’s initial reporting, the band member in question was Jeff Beckman and not Chris Logan.

I followed up by asking Chris a few questions: “Did Jeff know that the audience member was a woman when he called her a ‘dude’ and ‘him’. And doesn’t it seem ironic, when talking about excessive violence and force to threaten to ‘fucking kill’ someone?”

Chris’s response was short and to the point: “No of course he didn’t know it was a woman.  I guess it could go two ways since the song is about killing cops.  I really have nothing more to add to this.  The damage is done.”

It’s important to back up though, as Absolutepunk provided not only a transcript, but a video.

Get the rest of the story, including a transcript of the conversation here.

Beckman: “Pigs take advantage of their authority and their power. And it’s not just with Black people. It’s not just Black lives matter. There was fucking three slayings in [x] last year at the hands of the police, on White people. So it’s not just a fucking racial thing. This is everywhere.”

Beckman: “What? You’re calling me a racist?”

Beckman: [laughs] “It targets every community. I don’t know what the fuck you’re saying to me motherfucker.”

Beckman: “I’m saying some white supremacist shit?! What the fuck are you talking about.”

Beckman: “Who the fuck are you talking to?”

Woman: “I’m not saying you’re a horrible person, but–“

Beckman: [interrupts] “I’m saying this isn’t an issue of White or Black. This is an issue of fucking pigs. [referring to the woman] And if that dude comes in again I’ll fucking kill him.”

And that’s why I asked Chris the questions I did. The official stance of A389 is that, chastise the punch, but leave the rest of it alone. And here’s where it gets interesting. Jeff is chastising police brutality, while preparing to play a song about killing cops, and in response to someone engaging into the conversation he started, he reacts with extreme and excessive force.

Another thing I’ll say is that to call this audience member a heckler is to devalue the place that audience members have in the scene, and in discussions that band’s get to lead through virtue of being bands. Was she a heckler, or was she just a fan trying to keep a band honest?

The last thing I’ll say is that to accuse people of engaging in a ‘witch hunt’ when they are trying to find truth, and have honest conversations about things that do plague the scene, like transphobia, is to ignore the issues and to let them fester, and in the meantime, people who have grown up in the scene feel less and less welcome all the time.