A good day for death metal as Necrot stream new track, ‘Mortal’ LP out in August on Tank Crimes 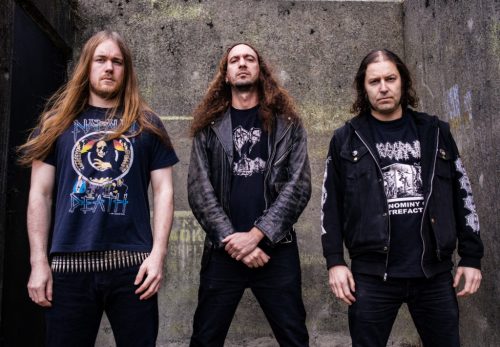 Bay Area death experts Necrot grace us with the disturbing murk of “Stench of Decay” today. The band will release Mortal via beloved punk/metal label Tank Crimes August 28th. This ought to prove to anyone with ears that Necrot are pretty much the best new-ish death metal act around.

“When we first started, our goal was to play death metal and put out some tapes,” says Luca Indrio. “We always wanted to write an album that twenty years from now would be remembered as a true classic of the genre. With Blood Offerings, we may have done that but with Mortal we have definitely done that. Time will prove us right.”

Bold words but I believe them. Blood Offerings was sick as hell and if this is half as good it will still be better than a lot of crap people like too much. Recorded by Grammy award winning engineer Greg Wilkinson (High On Fire, Autopsy) and mastered by Alan Douches (Cannibal Corpse, Cattle Decapitation, Mastodon), the follow up to Blood Offerings can be pre-ordered HERE.

The killer production, riffs and menace of “Stench Of Decay” are very good signs.

Notes Indrio, “‘Stench Of Decay’ is the smell of our world falling under the greed and senseless pride of men. It is the stench you smell in the morning when you realize that outside your door is nothing but ugly humans ready to deceive, steal, or even kill for a little more power or money. ‘Stench Of Decay’ is what we have been breathing since day one and we will continue breathing it until everything and everyone we know and love inevitably disappears.”

Where is the lie?