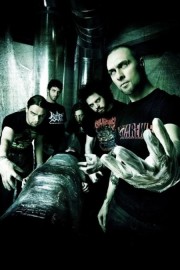 Death metal act straight out of  Belgium, Aborted, are making a return with their 7th record, “Global Flatline.” Due out January 23rd in Europe and January 24th in North America, the album features guest appearances by Trevor (The Black Dahlia Murder), Jason (Misery Index), Keiijo (Rotten Sound), and Julien (Benighted). The Album will be released through Century Media Records.