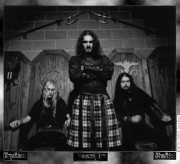 “Abzu” is the second of a three-part series that features Abus’s signature sound in maniacal fashion. Recently completing a string of American dates with Immortal, the band, featuring guitarist Vis Crom and bassist/vocalist Ezezu, performed a cross section of their extensive catalog to enthusiastic audiences. Absu sold out of merchandise well before the six date journey concluded in San Antonio late February.

Absu came to international prominence with the release of their 1993 debut, “Barathrum: V.I.T.R.I.O.L.”. Originally released via Gothic Records, the label later licensed the record to France’s Osmose Productions. (Immortal, Enslaved, Impaled Nazarene, Melechesh) Absu would then establish a solid relationship with the label and thus release all later recordings via the renowned independent label, including the highly regarded “Tara” in 2001. In 2007, the band would announce a new partnership with London-based Candlelight Records. The band spent much of 2008 writing/recording “Absu”, which featured contributions from members of King Diamond, Aura Noir, Melechesh, Firstborn and Enthroned.

Planned for release later this year, “Abzu” will tap the expertise of Polish artist Zbigniew Bielak (Watain, Destroyer 666) and Costin Chioreanu (Ava Inferi, Grave, Demonical) to assemble the album’s packaging. “In the past, we have utilized the talents of Belgium artist Kris Verwimp,” says Proscriptor, “but now we’re aesthetically detouring into more mystifying, Thelemic realms: musically and lyrically.”

Projected track listing of “Abzu” (in this particular order) is:
I.) Ontologically, It Became Time & Space
II.) Circles of the Oath
III.) Abraxas Connexus
IV.) Skrying in the Spirit Vision
V.) Earth Ripper
VI.) A Song for Ea including:
a. E-A
b. A Myriad of Portals
c. 3rd Tablet
d. Warren of Imhullu
e. The Waters – The Denizens
f. E-A (Reprise)