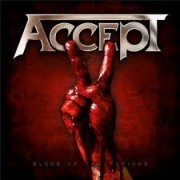 Legendary heavy metallers Accept have announced that they will film their “Bang Your Head” festival performance in order to release a live DVD.

The band’s manager Gaby Hoffmann released the following statement: “The show in Balingen is the only one in the new life of ACCEPT that is going to be filmed! I expect the “Bang Your Head” to be both the ending and the highlight of ACCEPT’s exciting comeback. Neither one of us – or the people who helped us – expected ACCEPT to be welcomed by the fans in this way. We’re grateful and happier than anyone else and would like to close this chapter – with a cinematic documentation which shall capture the atmosphere in Balingen.”

Their comeback album, “Blood Of The Nations,” was released in 2010 on Nuclear Blast Records.