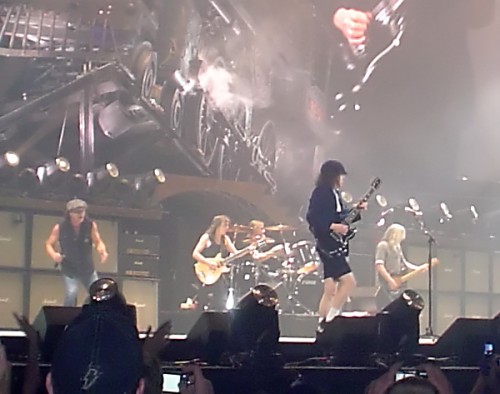 I had some qualms originally about writing about this album since it technically didn’t contain any new material when it was released in ’76. Two tracks (“Little Lover” and “She’s Got Balls”) were released on the Australian version of High Voltage in ’75. The rest of the track came from the Australian version of T.N.T. which came out later in ’75.

And of course, some will point out that High Voltage isn’t even a metal album, so why am I bothering to even write about it? Definitely this era of AC/DC, especially when they broke out of Australia and headed to the U.K., was considered punk by many. And for whatever critics of AC/DC’s music there still exist today (I am reminded of a scene of dialogue in Christopher Krovatin Heavy Metal and You), they always had their detractors. But probably a bad review in Rolling Stone in ’76 was much better than no press at all.

Billy Altman wrote for Rolling Stone: “Those concerned with the future of hard rock may take solace in knowing that with the release of the first U.S. album by these Australian gross-out champions, the genre has unquestionably hit its all-time low.”

He went on to say, “…AC/DC has nothing to say musically (two guitars, bass and drums all goose-stepping together in mindless three-chord formations).”

The ‘mindless’ aspect Altman refers to has sometimes been revered as an almost militaristic discipline coming forth from the will of Malcolm Young and making AC/DC a band that has been considered punk, hard rock, blues rock, boogie rock and heavy metal. At the end of the day though, they’ll always be straight-up rock ‘n’ roll, and to believe that they haven’t had an influence on that genre and all the others listed above is just ludicrous.

There are the critics who say that AC/DC is simple music for simple people, here in the United States – it’s music for rednecks, and the stereotype goes that they’re (we’re) all stupid and inbred and cheap-beer-guzzling and rock-n-roll-driven.

But let me assure you, I spend a lot of time with academics and activists and electoral politic types – and sometimes it just works to crank up the AC/DC and chant: “Oi! Oi! Oi!”

And hey, if I happen to be holding a 40 of Ice House while I’m chanting, what’s it matter to anyone else?

Anyway! I have much indulged myself and gotten way off-topic here.

I don’t think there’s a song on this album that isn’t just pure anthem. I remember watching some heavy metal documentary when I was in middle school and they talked about how glam metal has the anthem and the power ballad and the rest was filler – nothing on High Voltage is filler.

It starts off with the ever-famous “It’s A Long Way to the Top (If You Wanna Rock ‘N’ Roll)”.

This song wasn’t the first instance of bagpipes in rock music, but I admit that it is my favorite (and Bon learned to play the pipes just so that he could play them on this song!).

The lyrics for the second song on the album “Rock ‘N’ Roll Singer” pick up as sort of a prequel to the story told in “It’s A Long Way to the Top”:

But it’s the third and final lyric that makes the song what it is:

Of course there are going to be people who don’t like AC/DC – and AC/DC doesn’t care to be liked by those people. It’s all spelled out in the lyrics, you can stick all your crap, we’re not buying in, we’re rockin’ out!

The album shifts lyrical themes on the third song, “The Jack”.

“The Jack” is a raunchy song – from guitar riff, to rhythm section, to the slow, slimy way that Scott croons. Scott singing about his sexual exploits and painting quite a picture.

Whether anyone liked his music, he’d played his gig.

“Live Wire” starts off with a pulsing unavoidable bass line that I think is underappreciated in music.

Lyrically the song reminds me of “Dirty Deeds Done Dirty Cheap” (which was released later in September of 1976).

For all of this and the album just now comes to “T.N.T.”

The Oi! Oi! Oi! chant works up the listener and just when they think they can’t take it anymore they’re thrown into one hell of a lyric:

“Can I Sit Next To You Girl” would be the best “met-a-girl-at-a-show” song I have ever heard, if it weren’t for “Little Lover”.

On this album AC/DC has a way of seamlessly moving between loud and abrasive hard rock and slower blues rock. “Little Lover” (and “The Jack”) is an example of the latter.

The last lyric reminds me of one of my favorite shows, “Grounded for Life” (which is a favorite for the relationship between the parents):

Believe it (or not) “She’s Got Balls” seems like the closest thing to a love song that Scott could write.

Of course, it wouldn’t be an AC/DC song if it wasn’t crude.

The album rounds out with the title track, and returns to the lyrical theme of the first two songs.

Conclusively, this album stands the test of time. In fact, I think it’s immortal. And I give it five out of five bagpipe solos. So if you get the chance, put it on, turn it up, grab the cheapest beer you can stand – and see if you can’t remember what it’s like to dream of wanting to rock ‘n’ roll (whatever rock ‘n’ roll is for you).