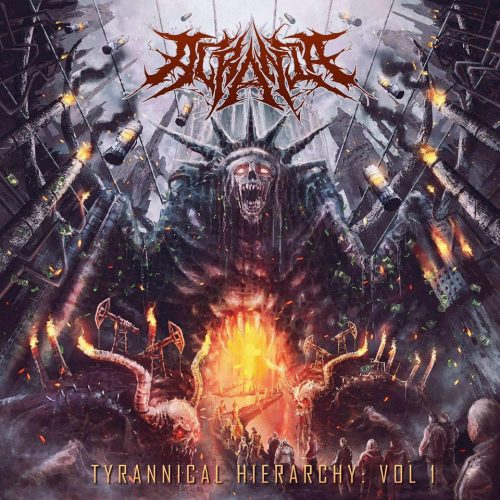 British death metallers Acrania returned last month with Tyrannical Hierarchy, Vol. 1, the band’s first release since 2014’s Totalitarian Dystopia. The band had this to say about the release of their EP and what they’ve been up to the past few years:

“Back in 2015 we were burnt out from touring, set backs & constant member changes so we decided to call it quits. We had no intention of releasing new music at the time and despite remaining close friends, we each quickly moved on to new projects. After a couple of years, whilst hanging out we naturally started to finish off these unfinished tracks… Working to prefect them whilst drawing on the experience each of us had gained through working on our new projects. Through doing this, we inevitably re-ignited the passion we had when we first started the band, ultimately leading to the completion and release of this EP.”

I may be almost a month late, but once I realized this album was out, I knew I had to write about it. It goes hard as fuck.

Check out my full review of Tyrannical Hierarchy, Vol. 1 here.

This six-song, sixteen-and-a-half-minute EP wastes no time getting down to the business of brutality, with the first minute-long track “Scopolamine.”

The second track, “Exterminate the Liberated,” starts with a Willy Wonka & the Chocolate Factory sample (who knew Gene Wilder could be so fucking brutal): “It’s all there, black and white, clear as crystal… You get nothing! You lose!” The song builds on this with probably my most favorite sample in a song ever. They sample A Few Good Men and as Jack Nicholson yells, “You can’t handle the truth!” Luke Griffin growls along. A song about the futility of war (unless your a profiting capitalist) with lyrics like: “Hate! // The news anchor squeals // The concept of religion is the perfect influence for hate // Speaking scripted words // One system of control supporting another // A political use of religion works perfect when you create racism!”

The third track, “Gagged With Propaganda,” (which features Ben Duerr & CJ McCreery) seems like standard angst about work-a-day complacency: “Of this putrid system that’s infected with // False hope, false dreams, false beliefs, false system // All of this falseness // Work 8 hours, sleep 8 hours, coward // Do this, do that, do not question authority // Breed, misconceive // Choke on the disinformation that they feed!” I don’t know if I entirely agree with the take, but it’s a wallop packed into less than two-and-a-half-minutes.

Whether, like me, you’re an Acrania fan who didn’t realize this album was out or you’re just looking for some new death metal in your life, be sure to check out Tyrannical Hierarchy, Vol. 1.