Agalloch’s “Marrow of the Spirit” in top 50 NPR Albums 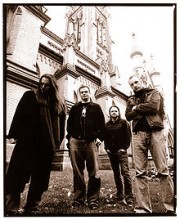 Portland Metallers Agalloch‘s 2010 album “Marrow of the Spirit” made it onto NPR’s top 50 albums of 2010 list. The album was released on November 23rd, 2010 on Profound Lore Records. NPR had this to say about the album:

“The forest is a common inspiration for black metal, particularly for the Norwegians who defined the genre in the early ’90s. That makes sense: It’s a cold, mystical place marked by unknown darkness. For Agalloch, the forests of the Pacific Northwest represent all of those things, but they’re also a force of healing. Still, Marrow of the Spirit is honest as it ends: After our spirits are renewed, we can return easily to misery. But, oh, the journey is worth the battle. The album’s exhilarating and epic turns shred and pound as much they shriek and coo. It’s the year’s most stunning statement in metal.”