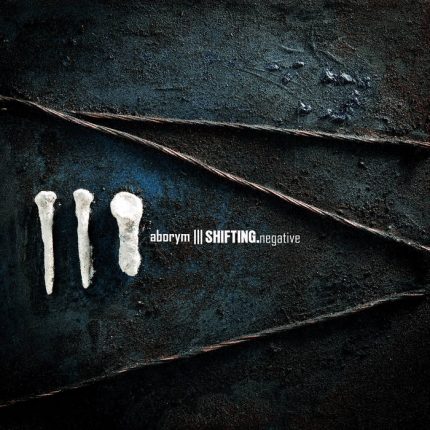 I have to admit the few shortcomings are that here and there the Nine Inch Nails influence on this record gets distracting. That said, everything is very well done. David Cragne’s cover art is cool but does remind me of a Trent remix record or something. “Precarious” is a gorgeous slow burner, though a few sections scream The Fragile. That said, it is still never really to the album’s detriment. It is just that the cleaner vocals than we are maybe used to are semi-Wax Trax meets NIN reminiscent at times. Hopefully people will realize that there is a lot more going on here than that and the band have their own vast influence and history.

Aborym find their best footing here in the surprises. “Decadence in a nutshell” takes a swaggering sort of swaggering Ministry-esque arena march into a contrast of militaristic fury and melodic and effected push/pull before a very satisfying bridge sets up a call and response of “This world is not for me” over a very chill groove that preludes a red hot guitar solo over a super fast mechanized gallop. “10050 cielo drive” has a dreamy almost pop-nursery rhyme opening before revealing a monster number that is sure to be a fan favorite, a song that is literally a fight between the desire to murder and more reasoned, slower and serene moments. This song in particular shows the band conquering a ton of styles within one grand industrialized umbrella.

“Tragedies for sales” kind of evolves out of an experimental shapelessness into a tribal loop that will hypnotize you. It eventually morphs into a super kinetic meditation on trust and control that is a case study in dynamic restraint and release. Fans of Chemlab or Combichrist will eat up this one. It is one of the most headphone worthy tracks, just a sick mix. It also really hits your brain AND body.

“Going New Places” if probably my favorite track, a slow grower that eventually really wins you over with a propulsive beat that could have been a mid tempo Front Line Assembly style track paired with some beautiful melodic Type O dissonance over almost trip hop meets Blanck Mass moments. But the EBM vibes win out on this one overall and keep it propulsive. There is a great balance between a sort of sexual machine shop feel and a sort of synthy spiritualism to this one. It’s just top notch. Every time it starts to go cold the ice breaks apart into a sort of tranquil but numb sea.

“Big H” kind of ends the record in a bit of nihilistic grandeur, almost collapsing in on itself but paired with stunning piano work and whirring and spacious textures that oscillate inside your skull wonderfully. This record has some very disorienting as well as almost physically empowering moments where you feel tension move through, in and over you.

When it is all over you are satisfied, as long as you are able to trust in the process. Personally, I think it is a trip worth taking.