Album Review: All That Remains – “The Order Of Things” 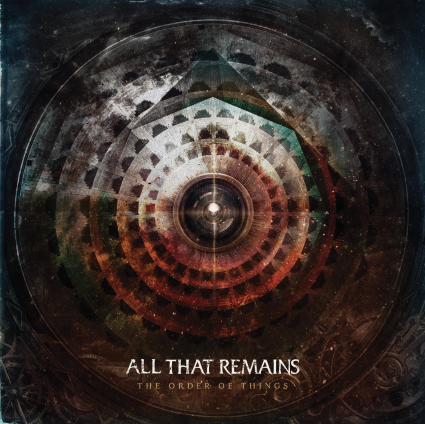 All That Remains are one of the most controversial bands in metal, a fact which often overshadows their music. While Phil Labonte has certainly been in the headlines lately (and the band’s last record A War You Cannot Win‘s hit “Stand Up” was #1 on Active Rock), the group has unfortunately been more synonymous with twitter banter and potty mouth behavior than their music.

“You have to adapt to the world around you as opposed to expecting everything to adapt to your perspective,” claims vocalist Labonte in a recent press release. “You can’t really control what goes on in your life, you can only control your reaction. I’ve gotten a certain amount of peace from embracing this truth. That’s the way things go. This is literally The Order of Things.”

Overall this record is their best synergy of styles with “Bite My Tongue” in particular really fusing the faster NWOAHM sound with their more recent embrace of melodic hard rock traits. With new album The Order Of Things, I tried to take the band on their own merits as a group, but I did have to take a tangent into social concerns first. For the full review see BELOW.

Sometimes you can control what takes place in your life.

I’m bi-sexual and thus have been following the controversy about Labonte’s casual use of the word “Faggot” with interest. I’m not into censorship and am a huge fan of pink haired goth punks Mindless Self Indulgence (who’ve aim to depower every controversial word in the English language their whole career), but I think using “faggot” is all about intent. When Jimmy Urine says it he is obviously being ridiculous or mocking the culture of put downs we live in, but with Labonte it does not ring the same way. Perhaps it is due to his uber masculine demeanor or that he is known to be on the more Libertarian side, but it comes off as more macho and bullying. And when Rob from Machine Head criticized it Phil called him “butt hurt” which doesn’t help perceptions.

All That Remains can, at their best, inspire. “The Greatest Generation” is a hard charger on here about Phil’s grandfather telling him to work really hard. The music is melodic, faster metalcore demanding we “remember what made us great”, which also includes the tradition of dissent which, in my opinion, makes this country great.

While I’m solidly on the side of gay rights and prefer respect, I also think we need to improve the conversation on these matters to bring everyone into the fold like adults or the divides just grow. Interesting because one of the better songs on this record is called “Divide” and is about integrity.

Phil, a lot of people “show the world what strength can be” by standing up for themselves when they feel terms are derogatory. You can’t not expect blow back- the price of free speech- and I think “faggot” takes away from how good your band can be at their best and turns potential people away who might otherwise be into what you are trying to convey when they hear more juvenile language on stage or social media that is not in your songs. It also encourages fans to be lazier and let’s face it…metal is better when it is a family than perceived as just hooligans and hate. DIRECT that anger into something productive not just words that divide. I don’t always agree with Phil’s politics (I’m pro troops but anti-military industrial complex/imperialism) but I do think he is smarter than that and overall tries to examine things.

Jon Davis from Korn is WAY more effective talking about when he was bullied in “Clown”  or dealing with depression in “Hater”  than in the goofy name calling shittiest Korn song he did with Fred Durst on Follow The Leader, for example. That said, I was once in a nu metal band called Brain Fuck Daddy, haha. Anyway, I met Phil years ago at The Chance in Poughkeepsie and he was friendly and cool with fans, so I’m gonna give him the benefit of the doubt and hope he is acting from his own karmic experiences and might take this “Criticism and Self Realization” if delivered more neutrally. Dude, you have a mouth piece in the scene and many people listen. How can we all be the “person that I wanna be” as a scene?

Anyway, back to the record. “This Probably Won’t End Well” opens things up strong and features great singing from Labonte, major growth from his early years as a strict screamer and evidence of his training with Melissa Cross paying off for sure. The hooks and melodies are big and soaring and sure to appeal to fans of the brighter side of Demon Hunter, for example. I think there is room in the scene for all this stuff and love melody myself. As much as I’ve been bumping the outstanding new Crypt Sermon and JEFF the Brotherhood discs, I don’t feel like I always have to party only with the cool kids. “No Knock” is a burly, marching kind of Pantera-esque number that finds the band aiming to reconnect to fans of their heavier side though lacks the frenzied intensity of the band’s early stuff.Still, a solid tune.”Tru-Kvlt-Metal” kind of takes to task purists in the metal scene and I give respect to Phil for kind of saying ATR are gonna just do whatever they want, even if I think it was a point they’ve already made through their shifting sounds over the years. Still, this is one of the heavier and better tunes on here. “Bite My Tongue” makes the point better through the music when, at 2:15 or so into the song, the band stumble into some real brilliance, a super cool little guitar break that takes things down into a sort of groovy and mellow Chili Peppers meets classical territory before Labonte screams and the band roar back with blazing leads lifting the song through the roof. Best jam on here by far.

“Victory Lap” seems aimed at people who hate to see underground bands succeed, with a cool lyric “Every time I rise you fall away.” I can respect that sentiment , though maybe I interpreted it my own way. Still, it is true many people hate bands as soon as they are more popular (or if said band, haha…offends the shit out of them). Then again, I love many Satanic bands who talk about murdering and burning people alive. At a certain point you have to take it with a grain of salt, but that doesn’t mean things should be glossed over or people should always have to have thick skin and not get tired of name calling. I’m way more into unity.

Back a few songs, “For You” starts of with kind of cool 80’s ballad guitars and I imagine will be a more big rock single type song. Producer Josh Wilbur seems to have gotten the band more inspired for this one after numerous records with Adam D. from Killswitch. I like Adam’s production on Killswitch records but sometimes find it a little flatter with other bands, even though he is the man and KSE are my fave metalcore band by far. That said, Wilbur has maybe made the best sounding ATR record to date with a blend of liquid clear vocals and very present guitar that is super hi fi but still has some character, every cymbal crash hitting home. The record is a bit too long and could have been cut down to maybe ten songs just fine, but die hard fans probably wont mind. Still, that slight bit of bloat makes the ambitious side of the record lack a bit of self awareness and tire the average listener – a drawback to what is otherwise probably their best release since early fan favorite The Fall of Ideals.

Anyway, I like this album and there’s some really good moments on here.