Johan Hegg’s vocals are more raging than ever as he shows us a dynamic range within his growls, snarls, and screams. From his mighty scream in the opening of “War of the Gods”, to his low doom metal growl in “The Last Stand of Frej”, to the phenomenal vocal cadence structure of “Töck’s Taunt – Loke’s Treachery Part II”, we bear witness to the vocal subtleties that can be achieved with what is usually a standard death metal voice. The melodic riffs and harmonizing guitar work of Johan Söderberg and Olavi Mikkonen have returned as heard in the brutal extravaganza of “A Beast Am I” and the forlorn harmonies and melodies of “Doom Over Dead Man”. We are also witness to some of Fredrik Andersson’s finest drum work to date. Jens Bogren’s return to production helm has brought an extraordinary analog quality to the drums not seen since “Fate of Norns”. Couple this with the partnership between Fredrick and the robust bass work of Ted Lundström and you have a recipe for a slaughter of epic brutality. In “Destroyer of the Universe”, they bring to life the quick and ruthless destruction that Surtur is destined to bring and in “Wrath of the Norsemen” we see them capture the horrors that Vikings leave behind. 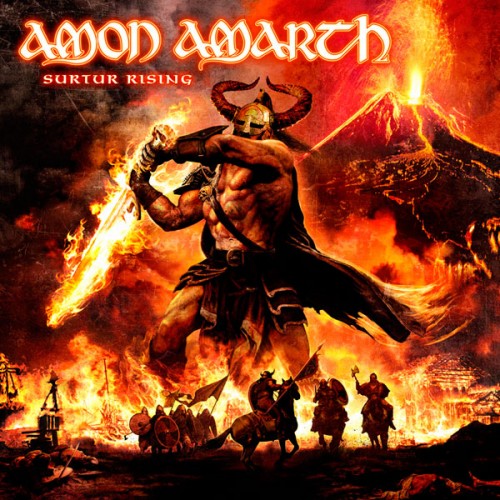 Three standout tracks on this journey into the storied world of Ragnarök are “The Last Stand of Frej”, “A Beast Am I”, and “Doom Over Dead Man”. “The Last Stand of Frej” reveals a side of Amon Amarth that I haven’t seen them dive into with such zeal since becoming known for their melodic death metal style – the world of doom metal. From the first note you can tell this track is a sorrowful tale of tragedy and Amon Amarth puts their proud brand on the doom metal genre. Johan’s vocals are deep and guttural, the riff is memorable, the chanting lines “His wrath burns!” and “There is no way to defeat!” has you throwing your fist in the air and joining them in their chant. The tempo picks up in the last half as you our hero Frej is determined to meet his fate headon with grim determination, sinking his horn into the eye of Surtur as the song mournfully fades to close. “A Beast Am I” is one of the most fierce and vicious songs Amon Amarth has written which is appropriate when telling the tale of Fenriz. The opening riff and drum work leads into an unforgettable howl and the vocal assault continues throughout with its frenetic cadence. The middle section slows down to a slower pace and Johan demonstrates the bestial growls that his throat can achieve. After what is easily my favorite guitar solo of the album, we are lead to an abrupt but brief moment of silence until a melancholically subdued riff picks up which eventually leads into the symphonic opening of “Doom Over Dead Man”.  This closing track is another doom metal type song that demonstrates the stunning musicianship via the intricate interludes between verses, an unforgettable bridge, and a closing verse that will have you once again raising your voice and fists.

For some, upon first inspection this can be just another Amon Amarth album that hasn’t seen a changing or evolving sound for a few albums now. But when you take the time to look beyond the surface of its themes you see a complex web of musicianship. The bridges and transitions, both within and between songs, when paired with the overtures between verses and post-choruses, capture through music the dual nature of life and death and the necessity of each that the Norse gods brought and the Vikings knew. Each song can be enjoyed in its separate glory, but when you put all ten tracks together you see it for the masterpiece that it is. Each song is well thought out and many hold deeper philosophical meaning than most people realize. “Slaves of Fear” speaks of Oden only in passing, as its theme is about the yoke of oppression that religious fanaticism and zealotry can instill on people. “Doom Over Dead Man” is about the ideal form of immortality, as Johan Hegg explains:  “All of us know that we will die, but what will live is what people will remember about us. So, if you leave a good memory, you will leave a good name, and people will miss you and mourn you but they will learn from you and they will take a part of you with them forever.”
[youtube]http://www.youtube.com/watch?v=0mB9w183dg4[/youtube]
Those of you who are new to this type of melodic death metal, the harsh vocals may make this album less accessible than some of their past work, but listen to “The Last Stand of Frej” or “Doom Over Dead Man” to wet your hesitant appetite. Otherwise, enjoy the experience that is “Surtur Rising” through its cover and sleeve art. Tom Thiel (who also did their “Twilight of the Thunder God” cover) once again captures the sound and vision that is Amon Amarth, not only with the cover of Surtur raining flaming death upon the world, but with his epic portrayal of Fenriz battling Oden on his eight-legged steed Sleipnir which can be seen on the inside sleeve art. Lastly, take note of the experimentation that Amon Amarth has played with for the first time. In “War of the Gods” you hear the horns of battle over the sound of clashing sword and axe. In “For Victory or Death” we find the use of keyboards and in “Doom Over Dead Man” they use the Dark Passenger Orchestra to bring to life a man’s stark realization that his name will not be remembered, thus losing his immortality.

“Surtur Rising” will be on my list of top metal albums of 2011 (evident by the fact I used the word “epic” three times) and I guarantee you I won’t be the only one to do so. They may not have progressed or evolved their sound at a pace that some would like to see, but look deeper and you’ll find it and realize there is more to Amon Amarth than simple battles between gods and men.