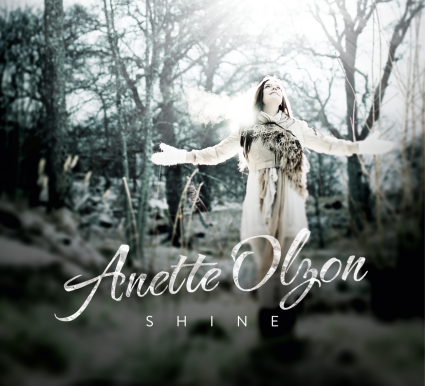 I tend to really root for singers as soon as they exit Nightwish. Without wading too far into the bog of eternal stench that is the ongoing debate over ex-Nightwish and current Nightwish vocals, I will say that I believe Anette Olzon (like Tarja), probably got a bit of a raw deal. Nightwish are known for screwing over their singers and treating them as disposable. People always debate different eras of the band. No one sounds like the operatic Tarja (who in my experience has always been humble and very cool/down to earth), while new singer Floor Jansen is top notch and a real rocker who I wish was just in ReVamp cuz I am just plain biased against Nightwish and dont trust their press statements regarding singer’s “exits”. Second Nightwish singer and Tarja replacement Anette Olzon had her work cut out for her. A little more frumpy, not as big a range but a lot of heart and talent in her own right, Olzon tried valiantly to fill the biggest shoes in symphonic metal.

Some people worship early Nightwish so much that they don’t care if the band were dicks to Tarja and now seem willing to overlook Olzon claiming she was fired for a 3rd pregnancy (makes sense since the band never liked that she had a kid when she first wanted to join), while others say she was a diva without great fashion sense or was too poppy, blah blah. Every time I have seen a picture of her she is smiling or looking like she really enjoys the music she gets to make and she has also spoken well of Tarja or other “rivals”. She just doesn’t strike me as a careerist, uber bitch! People should give Anette a chance on her own merits re: Shine. Stand out track “Lies” promises real potential for growth and the feeling of freedom to the track makes this whole effort worth it. You can’t hear that intro and not feel your heart soar a little bit.

Sure, Olzon is not the heaviest singer by a damn site. At times she sounds quite like a more restrained Celine Dion. Anette doesn’t have the stage stamina of some, but her voice sounds fantastic on Shine from start to finish. She clearly gave her all for these songs. This is an artist who has every right to a decent career, even though the songs on her debut solo effort are hampered by an uneven mix. The vocals sound great, from the poppy and string steeped “Like A Show Inside My Head” to the uplifting and self-affirming title track to weird renaissance pop of the quirky and charming “Floating”. This is really by no means metal but could fall into the symphonic and goth rock genre tags. The guitars really need more punch and the snare mix is pretty shit and flat, while the bass levels are also sometimes strange or tonally bland. Oddly, this almost doesn’t matter (though it is distracting).

The songs are pretty memorable and the vocals carry you away, while the string and keyboard elements of the production smooth out the blemishes of the underwhelming electric guitar. It really feels like a woman just trying to be herself in many facets while enjoying her own creative process. “Moving Away” will make you wish more of the record had such a cool, acoustic and rustic almost traditional Euro-folk feel, and while a few songs after the midway point the tunes start to blend together, Anette saves the day with the rousing album closer “Hear Me” (which goes from pastoral calms to a sweeping vocal overture with electronic and hard rock flourishes.