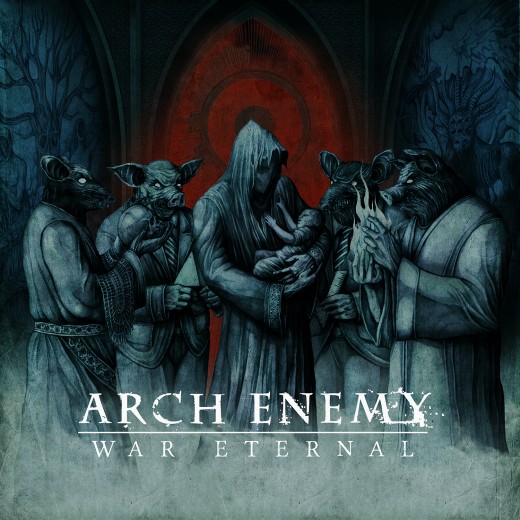 It sent shock waves through the metal community when the startling news came down the vine that Angela Gossow was leaving the vocal throne of Arch Enamy to become the band’s manager, passing the microphone/baton to ex-The Agonist rising star Alissa White-Gluz. Look, skeptics have to remember that Michael Amott knows what he is doing. The guy could have stayed with Carcass I presume, but he chose instead to keep Arch Enemy as his main baby now (which is fine cuz I love Arch Enemy and Ben Ash was in Pig Iron, a sick bluesy stoner rock band with harmonica who played with Maiden once and are under appreciated in the USA…so, long story short, Ash gets my nod as a cool replacement in Carcass for Amott. But let’s get back to Arch Enemy proper.

“Tempore Nihil Sanat” opens the record with a flourish of ominous classical anticipation building. We hear some chanting that could be from The Omen or a Ghost B.C. record before…pay off! “Never Forgive, Never Forget” bangs in with such classic Arch Enemy style that you have to remind yourself there have been line up changes. “Never! Ever!” Even the album art is kind of cool, kind of ugly-like most of their CDs.

New guitarist Nick Cordle (ex-Arsis) does a great job, and though Chris’ leads are missed, the new stuff really is just as good. I mean, it is Arch Enemy. You know what you want and they deliver, with some surprises thrown in here and there. I’ll tell you this…I am more into this than the latest re-incarnation of The Haunted. Though maybe I am biased on both counts since I like Dolving-era Haunted the best and also since I heard Alissa is roomies with the drummer of Blackguard, Justine. Love me some Blackguard!

Anyway, “You Will Know My Name” starts off with almost power metal riffing, and the song could in fact be a mission statement for White-Gluz. She commands the number well, making it her own but showing she has the skill to also competently execute things in a style that makes this album sit well with Angela’s tenure.

Click HERE for more and to hear some music!

Alissa is both earning and claiming her own seat at the table and it is pretty evident on this number. Plus the keyboard augmentation and dueling guitar outro with no drums is fucking super sweet and tasteful. “Graveyard of Dreams” is another nice surprise, an interlude reminiscent of the intro to “Cemetary Gates” (hmmm…Graveyard? Cemetary? Connection? I don’t know). Likewise “Stolen Lives” is a real shining track, the whole band just elevating the intensity to fever, whiplash pitch.

White-Gluz may not have the “I can rip you in half” physical presence and unrelenting intensity of Gossow (or the Julian Assange/Johan Liiva look, haha), but she kills it on this record. People who dismiss her as a pretty face for the band are gonna get their presumptions shoved uo their asses. “Time Is Black” is a later track on this release, but it is probably the number where she fully sells her new job competance the strongest, just a blistering number that also isnt afraid to throw in some gothy touches with a harpsichord and xylophone (I think) sounding intro that sets up a savage attack of melodeath to come. The keyboard work is also really supportive and strong on this release, adding an extra dimension to the groove heavy riffing. The title track is cool, a mid tempo recounting of trials, but it isn’t the strongest song. “As The Pages Burn” destroys pretty much every metalcore band out there at the moment and half the thrash bands as well. It is pretty much up there with some of the best Lamb of God numbers and really ripped my face off. The chorus is huge and ragged.

Due out June 10th in North America via Century Media Records, ‘War Eternal’ was recorded in various studios during winter 2013/2014 and was produced by ARCH ENEMY themselves with Jens Bogren (OPETH, PARADISE LOST, KREATOR) mixing and mastering the album at Fascination Street Studio.

All in all, this is well worth your money if you were a fan of the band and they deserve your support still. The last song is a monster of Amott’s melodic skills which made Heartwork so eternally memorable, an epic instrumental outro track called “Not Long For This World”. It sounds like closure, but let’s hope it is more of a send off tribute to Gossow than the fate of the band. No, we want Arch Enemy to be long for this world, cuz history has repeated itself and…once again, they are just getting started.