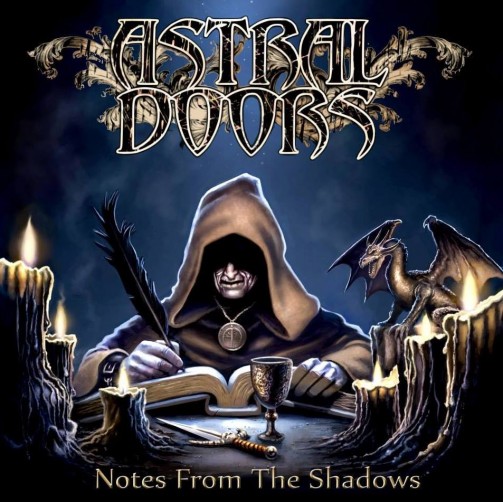 Astral Doors newest (and 7th album!) Notes From The Shadows will appeal to any fan of classic metal like The Rods and Saxon or of course RJD (r.i.p.), who vocalist NPJ’s inflection and cadences have often been compared to over the years this Swedish band have made their mark. Nils Patrick Johansson as a vocalist likes to do those kind garble things at the end of his words like Ronnie did when he really meant it as in Dio epic moments like where Ronnie sang “You’re a rainbow…in the daaaahhhhhhhhhhk/ no sign of the morning” from near the end of that classic solo Dio song, for example. That said, Astral Doors stand firmly on their own heavy metal feet though love is displayed for the greats, of course. It is very cool they have done so many records in just over a dozen years, as many bands just don’t have that kind of output. (Tool, stop making wine and watching wrestling and get finished in the studio please, hahaha).

As in the past, Astral Doors hit hard with big heavy metal riffs and crisp dueling guitar action topoped by NPJ’s firm vocals up front. Religious and occult imagery abound, though it is a shame the cover art is so hack and silly looking it will probably make some people think this record is more sub par than it really is. That cheezy lich looking wizard and dragon on the cover could have been rendered with a lot more skill, since the band obviously care about the music on this record. Crystal Viper have also fallen under criticism recently for their deteriorating record art quality, which is a shame as they are another band who rock the heavy metal sound of yore to great effect.

“The Last Temptation Of Christ” opens things up with high energy and will be sure to be good live. “Disciples of the Dragon Lord” starts out very much reminiscent of “Empire” by Queensryche’s vibe until NPJ comes in and sounds very much like Ronnie James. When I opened for Dio Disciples once it was their first night replacing Tim “Ripper” Owens and it’s a shame they didn’t have NPJ up there with Oni Logan instead of Mark Boals (who was friggin’ reading the lyrics to “Holy Diver” and other hits anyone’s grandma who is metal knows by heart). Anyway, tangent aside “Wailing Wall” is maybe the strongest track on Notes From The Shadows, a song lead by the hard drum attack and top notch performance of heavy hitter Johan Lindstedt that discusses the end of time and on which the whole band really gel. The Jonas Kjellgren mix on this song really does the band favors and the guitar work sizzles.

“Shadowchaser” has a sort of “God of Thunder” riff with a kind of warbly bluesy vocal intro from NPJ, but the band (especially the lead guitars and Last In Line-esque keys of Joakim Roberts) bring the fury. The group are very tight with their arrangements and this album has numerous highlights, from the lengthy organ centerpiece of “Hoodoo Ceremony” that prefaces “Southern Conjuration”‘s bayou tales of a Louisiana rendezvous of Voodoo and black cat bones (though I’m not really into metal’s recurring tendency to equate Voodoo with evil). The best lyrics on the album go to “Desert Nights” depiction of “juveniles on vacation” in a tale of patriotism taken advantage of by powers that be eager to mislead and capitalize with power plays on those who would serve for what they think is a good cause. At least, that’s my take on it.

This isn’t the strongest classic metal sounding album I’ve heard this year. I’m more into the sounds of Amulet and Horisont, for example. But if you like really solid classic sounding metal with great performances but not a lot of surprises, this will serve you well for awhile.