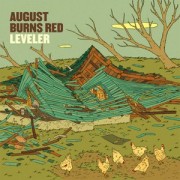 Harmonious and whole, August Burns Red pushes buttons and envelopes with their latest release from Solid State, “Leveler.” The Lancaster, PA boys break new sound ground as they diligently push themselves further and progress faster than the rest of the metalcore pack. As with their previous release “Constellations,” they teamed up with superhuman producer Jason Suecof at his Audio Hammer Studios in Orlando, Florida. The collaboration of the two again resulted is something very special and rare, true artistry. “Leveler” takes you in many harmonious directions musically and incorporates myriad new expressions. With all the instruments sweeping and swirling down this brave new path, the only thing is it lacks familiarity.

On “Leveler,” we hear some very different vocal stylings from frontman Jake Luhrs. He has added a third application of his voice, a very sharp and shrill scream. We only saw a few glimpses of it on their previous release, but it seems it has been refined for this recording. “Divisions” is a shining example as well as “Pangaea.” Also, during the overly present soft breakdown, Luhrs expresses lyrics via the spoken word in “Salt and Light” and  “Cutting The Ties” and there are glimpses of singing on “Salt and Light” as well as “Empire,” which have ‘live sing-a-long’ written all over it.

Guitarists Brent Rambler and JB Brubaker have definitely stepped their game up. They offer up some ridiculously radiant riffs that rip across the sonic spectrum. In my interview with Brent, He said “There’s a lot more tough riffs and little quick stuff and there is a lot more guitar solos.” This is definitely the case. “Leveler ” is riddled with sick little intricacies and mini-leads. We also see more of the clean tones on this release. In some of the songs, they have incorporated a clean breakdown as opposed to the more cookie cutter half-time sludge-a-thon. “Carpe Diem” and “Internal Cannon” both break down to soft, spacey sweetness. “1-16-2011” is a nice clean instrumental featuring some delayed melodic picking leading into the super-lick injected “Boys of Summer.”

I might add that Dustin Davidson’s bass is perfectly presented throughout the entire album, showcasing an instrument I find to get frequently lost in the mix. Matt Greiner probably has the most difficult job of them all, delivering the consistently changing tempos and fills to accommodate the sporadic aggression of this album. The hard work these two put into their performance truly outshines their previous recordings and I am most pleased with their toils.

There is not a shred of doubt that these guys are quickly and accurately perfecting their trade. My only fear is that in their quest for individuality and autonomy, they get lost in sea change, drifting further away from what put them at the top of the metal world. I think this might be considered the “artistic” or “experimental” album in their catalog. It’s a far cry from the vice-like hold that “Constellations” still has on me. There is definitely some unexpected things emanating from “Leveler” and they are executed with powerful precision. While I may sound a bit obstinate to accept the change of their sound, I’m still anxiously awaiting tuesday to give them my hard-earned dollars to buy this album.