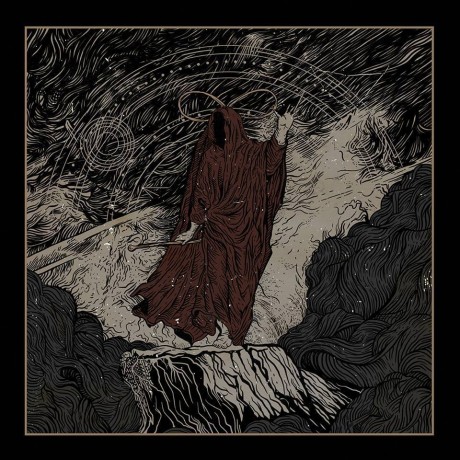 Vancouver’s Auroch have a winner in 20 Buck Spin first time on vinyl release From Forgotten Worlds. Death metal as Hell itself, the very conception of this record seems like it must’ve existed in a Platonically ideal metal mode. Dark and legit like a modern take at the early recording quality of Carcass thrown into a blender of the shatteringly insistent type of drum persistence that made Kataklysm and Cryptopsy fellow Canadian sensations, this album is dirty and possessed. It is awesome more people will get to discover this batch of songs thanks to the vinyl release.

“From Forgotten Worlds”, the incinerating title track, is a rewarding barrage of kick drum attack, shredded old school growls and carpal tunnel inducing fretwork that is as techy as the mostly more old school leaning band gets. The riff 3:50 into “Slaves To A Flame Undying” packs enough metal to fill the average person’s lifetime quota before an even heavier slow bridge drops us into the blissful depths further.
But the most powerful song of all might be the very no fucks given and 3:15 no joking around, to the point blitzkrieg of “Tundra Moon”, a near masterpiece of raw attack that is as brittle as a blizzard scoring your face (complete with a very Morbid Angel friendly raging guitar solo). “Fleshless Ascension (Paths Of Dawn)” even has a few dissonant riffs that could fit on the slower sections of an early Goatwhore record.

This eight song monster (order HERE) is as satisfying of a death metal on vinyl deal yet to hit the market this year. There is an unstoppable energy coursing through this release to more than hold you over until the new Gorguts. Bad ass stuff.