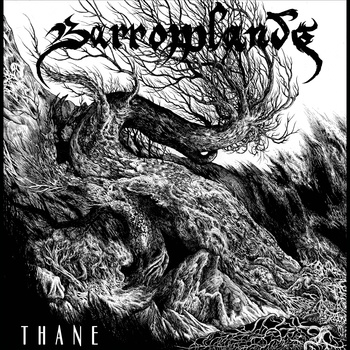 Barrowlands keep it fairly simple on their new release . I’m not super familiar with their demo but this release is really up my alley. From a unique band name and cool art to a way with songcraft, the band show that you can make fairly traditional black metal with slight post-rock musings (and the Pacific Northwest’s flair for the natural world) still interesting by, y’know, having great riffs. Who da thunk it? All that and a record title Thane that makes me want to re-read the Dragonlance Dwarven Nations triology.

“Alabaster” opens things up on a determined note, though the album gets stronger from there. “Peering Inward” evokes the best dissonance of Aosoth with killer slightly off kilter, insistent drumming while  “Mother Of Storms” is of those songs you fear to write about for worry of somehow ruining the perfect balance of styles at play if the band get more blog notice and hellions and trolls start to hyper critique them. Just keep doing what you are doing, Barrowlands. This is music you could blare at the skies and stand atop any metaphorical mountain peak silently professing your will to the cosmos to. Strong shit.

1349’s recent Massive Cauldron Of Chaos was much more speed and flash than this release, but I’d bring up that band’s song “Exorcism” as another BM song currently that is served immeasurably well by letting the song do its’ own work instead of trying too hard to out-Agalloch (or in prog’s case Opeth) the next band on the “charts”, for example. But really, “On Bent Boughs” is a cello enhanced respite of acoustic meets dirge that live must be very moving and would fit just fine if Barrowlands did happen to open for John Haughm’s more famous Oregon collective someday (shit, maybe they have already. Those bands all seem pretty tight out that way).

I don’t want you all to be too upset that I have the new Enslaved album (holy shit is it awesome!) already, so please be pleased that I am going against my better judgement and telling you about Barrowlands even though they might have to fend off one or two new fans. Listen to Thane now, here: