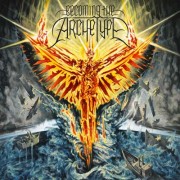 Becoming the Archetype has quickly emerged as the epitome of growth and potential in modern metal and nothing shows this off more than their newest album Celestial Completion. The album starts off (as most do these days) with a short intro to stoke the flames before engulfing your eardrums with a fireball of metal. “The Magnetic Sky” kicks into the malevolent drumbeats and doesn’t stop until the down tuned aggression of the next track “Internal Illumination,” which manages to slow down without grinding to a halt. Vocalist Jason Wisdom’s haunting voice still sounds more mature than his age should allow, and even the portions that feature clean vocals sound excellent. Both styles of singing is always accompanied by a pairing musical style that compliments it well, like power chords for a clean chorus or chugging during the angsty bits. Wisdom even gives death metal a go with bellows and screeches that would make Dani Filth blush.

Fans looking for more of 2008’s Dichotomy won’t find the same grandiosity in Completion, but much of that is due to a lack of producer Devin Townsend. They haven’t completely scrapped the texture, as the band utilized many instruments (sitars, vocoders) to reach a rather unique sound. The usual proggy scale-climbing wankery is in full force, so fans of no-nonsense music may not appreciate some of the liberties the skilled guitarists take with the material. Anyone without a stick up their ass will find tons to like about the new album, especially when it gets toward the end. A three-song section sees the band traveling from a piano piece to what a death march finished with a side of what would go great behind the boss fight in the next big XBOX shooter.

It’s tough to draw comparisons to a band like Becoming The Archetype, but Mastodon is the first thing my ear’s brain thinks of. Between the Buried and Me is next, followed by anybody who doesn’t care if they can’t understand the vocals and just enjoys some blistering metal. The band is straying a bit away from what got them where they are, but every avenue they chose to chase succeeded beyond expectation. Nothing about this album feels sloppy or haphazard, although watching a few of their video blogs may suggest otherwise. The horn section at the end of “Cardiac Rebellion” emphasizes that this band has only one direction to travel and that is straight up. With four albums under their spiked belt, nothing should keep this band from reaching stardom.