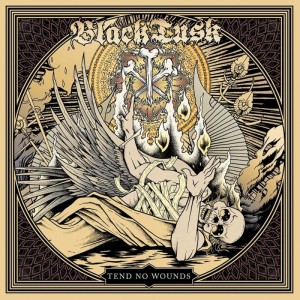 “Savannah Sludge” power trio Black Tusk are just plain underrated. As much press and buzz as they’ve gotten over the years, people just don’t give enough respect to them when you get down to just how solid their riffs are. They really embody hardcore and stoner ideals to an almost perfect degree. Few albums come as close as their recent Set The Dial did to blending those potentially disparate genres so that nary a lash is batted.

Tend No Wounds is their newest EP but proves a rocking stop gap between full lengths. It is meaty and satisfying but leaves you wanting more after 20 minutes of chunky bliss. Produced by Philip Cope of Kylesa with a true grasp of what works best for Black Tusk’s sound, the record sounds good and pro but still “raw” and real. The thumping kick drum of standout onslaught “Internal/Eternal” drives home a groove that Lemmy would be proud of. These guys aren’t here to stretch the mold as much as Deadbird or the aforementioned Kylesa, but they do a killer job upholding the foundation of crunching riffs and bulldozer bass. Black Tusk are just more basic, but what they do is second nature to them and doesn’t need a lot of flash or second guessing.

Intro “Cold Embrace” sounded so good on 33 instead of 45 and I was like , “Cool! They wrote a My War B-side type super dirge”. The drums sounded sooo big. It was a nice sludge exercise. Then “Enemy of Reason” kicked in and I realized the vocals were not supposed to sound like chopped and screwed bellows, even if they are from the South. Good news, even on the right speed it still burns! Yes, you should get the gorgeous bone white with red splatter 12″ vinyl option from Relapse Records (if there are any left). It sounds and looks so good on vinyl.

This EP is honestly the closest i think the Tusk have come to getting a sense of their explosive wrecking ball live show on record. Their full lengths are great, but maybe it is the immediacy of needing to stress a point on a shorter EP that seems to bring out a bit more electricity on this one. Every track on here will enhance their live set. My band Antidote 8 opened for them and Thou once and it was incredible to see the three dudes level a small stage.

“The Weak and The Wise” startles with some cool string parts ala Grayceon before a crazy good intro baseline snakes in like Dead Kennedys playing Ozzy’s “Crazy Train” at half tempo before the usual thunder and buzzsaw kicks in. “Enemy Of Reason” is another standout with a bouncy, pinky riff that serves a similar purpose to Kylesa’s early gem “Bottom Line”. You probably will pogo if it doesn’t spill your PBR.