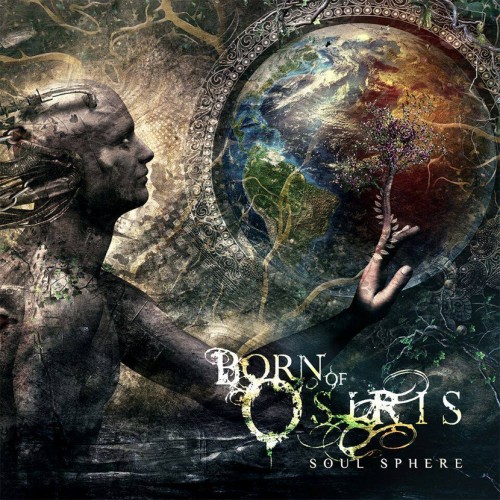 Born Of Osiris have really refined what they do, years of touring and proving naysayers wrong evolving them from an initial The New Reign buzz band heralding the metalcore/prog fusion’s new younger wave alongside cohorts Veil of Maya and early Faceless. Then the stupid fake windmill kick hardcore kids started ripping them apart for expanding their sound on (still my nostalgic favorite) A Higher Place.

Since then they have gotten better at their core sound but have also grown. With a few well regarded records under their belts, the band return with perhaps their most ambitious record yet Soul Sphere. This is a big statement from the band and in my opinion nails it where Veil maybe lost the plot a bit. I wasn’t against the new clean vocals in Veil of Maya, but BOO have continued to set their songs apart whereas Veil’s material other than the vocals is starting to blend together.

“Free Fall” on here is a thrill ride of screams, unexpected instrumental flourishes (is that a fucking djent xylophone, cuz that was awesome!) and the band sounding tight as fuck. Unlike a million bands who are doing fourth wave metal core and blowing goats, BOO have the fierce metal core screams without the fucking painfully predictable arrangements and the band sound pissed for a reason. But they aren’t hiding in having to sound angry for anger’s sake. “Free Fall” has literally got a few sections that will find you nodding your head headbanging or grooving despite any resistance, including the token BOO semi hip hop, cool ride out.

“The Louder The Sound, The More We All Believe” opens like a techno/EDM song, but it is one of the coolest tracks on the record and full of a more hyper conviction.

“Illuminate” is the weakest link where they sound the most like metalcore cliche except for the rad back up kid of epic slave rowing grunts and heave ho sounds in the background that could be roman gladiators on an Ex Deo record. But the song feels forced like it is trying to be the most accessible or metalcore accepted of the batch (redeemed by a killer whiplash part around 1:48, though).

Other highlights include “Goddess Of The Dawn”. Eos has always been a favorite greek goddess of mine. And the BOO song is a beast of gnarly tones, psycho drumming and a few Pantera grooves thrown in before things get super techy.

“The Sleeping And The Dead” kicks critics who say the band can’t write a memorable riff and jump around too much in the nuts with a sick opening riff before the band…jumps around a lot, haha. But the song doesn’t suffer and keeps you invested.

“Warlords” opens things with a mercurial piano line that continues to veer in and out beneath the barrage the band drop in like a bag of bricks on top of it.

“Tidebinder” starts with some crackling samples and then manages set an epic feel so well. Born Of Osiris have always had that ambition from awesome artwork to their writing. I liked The Devil Wears Prada’s Space EP, for example, but it could have benefitted from being a full album. BOO seem to know just how long to make their records while still cramming them full of hot, riffy action. If we were still in an age where a kid had just $15 for a cd and dropped it on this, they would have more than enough music and chant alongs stuck in their head, big synth parts and moshable moments to ensure they devastated their bedroom practicing cool faces for the local show.