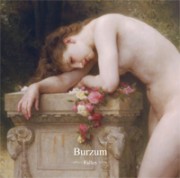 Whether he wants the title or not, Varg Vikernes is one of the great innovators of black metal in the new millennium. “Belus” demonstrated this with Burzum’s trademark lo-fi black metal brutality fused with, dare I say it, almost tender melancholic ambience. Now Burzum is back with “Fallen,” the follow-up to “Belus,” and the ninth full length recording of Vikernes’s dubious career. “Fallen” is no less groundbreaking than last year’s release. But where “Belus” was mired in controversy and shrouded in the myth of Burzum, “Fallen” stands alone, distanced from Vikernes’s personal narrative.

“Fallen” consists of seven tracks varying in length from the intro, “Fra Verdenstreet,” clocking in at one minute, to the ten minute long “Budstikken”. Thematically the album revolves around Burzum’s usual penchant for Norse mythology combined with introspective and existential meditations. “Fra Verdenstreet” (From the World Tree) references the mythological tree of Yggdrasil, and serves as an atmospheric opening to the album, complete with whispering voices and an ominous building tension released in the searing guitar riff that takes over at the beginning of “Jeg Faller” (I Fall). The symphonic qualities of Burzum’s riff-making are hard to overlook. The circling guitar riffs traditional to black metal, are elaborately ornamented on most of the tracks, as if they were written for a piece of classical music. This constant vacillation between droning black metal song structure and atmospheric melodies defines “Fallen.”

The vocals on the recording follow this general desire for contrast as well. Vikernes’s sharp black metal screeching, which on “Fallen” sounds a lot more like a sinister whisper in the background, is cut off by downright melodic passages such as the chorus line to “Valen” in which Vikernes bares his clear voice in the haunting lines: “Hvorfor i mørket, min venn, og der alene / søker du lysets vennlige varme?” (Why in darkness, my friend, and there alone / you seek the kind warmth of light). Generally the interplay works to perfection—as was the case on “Belus”—and Vikernes manages to straddle both of his voices without falling into the trap of fusing black metal with folk.

A lot of credit for the success of Vikernes’s vocal style has to go to the production of “Fallen.” The spaciousness of the album’s sound combined with the lo-fi feel, typical of Burzum’s basement recording style, presents a sort of sonic room more than a linear progression though a collection of tracks. This is especially clear in songs like “Vanvidd” (Insanity) where Vikernes alternates between several vocal modes in order to get his point across—a tribute to insanity as a muse—and “Budstikken” in which portions of the lyrics are read out like scriptures. In addition to melody making, vocal work is turning out to be one of Burzum’s strongest selling points and hopefully something Vikernes will keep exploring on future releases.

As the final track, “Til Hel og Tilbake Igjen,” (To Hell and Back Again) winds down into a solemn acoustic guitar driven outro, “Fallen” leaves a lasting impression on the listener, although it doesn’t pack quite the punch “Belus” did last year. The rawness and savage nature of that album was only one part of its success, the hype surrounding Vikernes and his release from prison being the other. For that exact reason “Fallen” is a new world for Burzum. It’s a chance for Varg Vikernes to create music that isn’t constantly viewed and understood in light of his personal history—a future that “Fallen” bodes well for.