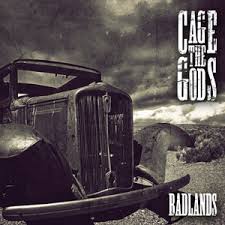 When I first opened this promo in the mail and it said “Badlands” I thought for a brief two seconds it could somehow be a Jake E. Lee helmed posthumous collection lost material of the classic group with the late, great Ray Gillen on vocals. But no…this is the record title of a new release from a pretty awesome UK group called Cage The Gods. The band are doing dates with Fuel and possess a similar radio ready but decently gritty enough and genuine melodic flair, but tempered to real classic rock chops (think Bad Company) and modern feel. This band is fun and exciting. It may be more commercial than some metal heads can handle, but if you grew up on big hard rock you will eat this up. The band kind of rock like Z02 where they were channeling greats of the past but in their own way, a sort of homage to more Aerosmith-y Lizzy and yet married to slight hints of post-grunge, harmony-laced stuff or even the bluesier, grainier side of Journey. They have a certain spacious freedom to the songs that in some weird way reminds me a bit of the cool guitar stuff Dead Letter Circus are doing, but in a much more traditional “rock” manner, like U2 crossed with The Black Crowes or something. “Promises” in particular fits this recipe.

The band have Irish, British, Scottish and Welsh members, which is pretty cool in the spirit of getting along. You’d have to be pretty jaded to not get a sense that these guys really like jamming out and crafting compelling yet palatable songs together. Winery Dogs needta take these boys out on tour, stat!

Click HERE for the full review of this rock solid effort!

Many metal bands who are much heavier lose the actual song in a chase to be at the top of the technical heap. Just lean back on a blues riff and follow the Page recipe once in awhile, y’all. Let a great riff claim the battlefield all to itself for awhile. Cage The Gods excel whether acoustically or electric on the honey rich vocal savvy charm of “Sacrifice” which calls to mind the best of Extreme meets “Black Water” Doobie Brothers (!!!), while single “Favourite Sin” could recall arena glory days with ease. Slick licks from Peter Comerford and James Moncur on guitars make this record full of solid energy and conventionally rooted rock that still satisfies and could blare from any suds soaked jukebox. The smooth but soulful and a tad scratchy vocals kick ass as well, especially on the hook to title track “Badlands” (it really sells the record).”Yeah, innocence has gone…”

It is really nice once in awhile to turn on some good rock like this and just cool out to some big guitars, solid bass and drums locked in unison and a sense of camraderie. The organic feeling is part of what made me rave about the pending Hellyeah record Band of Brothers and a similar enthusiasm but different sound is on hand here. The double time drums at the end of “Favourite Sin”, the infectious but very real and somewhat Soundgarden-esque drifter’s power of “The Ending” or other moments ensure this will get repeat plays. I’ve been digging bands with bite but also a bit of an upbeat twist to their grit lately, stuff like The Golden Grass who even sound like The James Gang at times while still riffing out tokeable guitar you can bury yourself in smoke to. Cage The Gods are more of a blue collar, beer sounding type of band with some killer ass no frills chops but it works just the same to rekindle any heart that is discouraged if it seems sometimes rock is waning in the public’s eye. With band’s like Cage The Gods around, rock n roll will never go away.