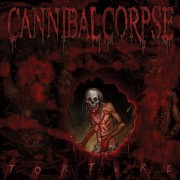 They’re back! Those gore-fiend New Yorkers turned Floridian have once again returned with “Torture”, their twelfth full-length album for Metal Blade Records. I’m going to go ahead and tell you right now, if you’re a casual listener, a mediocre fan, or just have never cared for any material from Cannibal Corpse, nothing found here on Torture will likely change your mind. Yet, if you are among the many who think that C.C. are rightfully deserved of being one of the biggest death metal bands, if not the biggest, on the planet, then you will be happy to know that Torture delivers in spades, exactly what these five splatter masters are known for.

There really are no bad tracks to be found on Torture. Considering the impressive pedigree that C.C. has, this should really come as no surprise. While Cannibal Corpse may not be reinventing themselves, and they surely aren’t reinventing the wheel of death metal, they are in fact, still providing quality material well into their 20 plus year career.

Ripping out of the gates with a classic, if not standard C.C. track is “Demented Aggression”, it doesn’t really offer anything that Corpse hasn’t done many times over, but honestly it’s a really good song that sets the pace of Torture perfectly. “Sarcophagic Frenzy” fires in next with an impressive display of interplay between guitarists Pat O’Brien and Rob Barrett. The chunky riffing and underlying melodies are simply top notch and really bring out the attributes that can make C.C. so appealing. “Scourge of Fire” is destined to be a crowd favorite, with its pit-friendly, head-banging, doom drenched brutality. The slower riffing works so well in creating that special, kick-ass dynamic that shines when juxtaposed against the songs faster, more furious moments.

Other highlights of Torture include “Followed Home Then Killed”, with its great use of dynamics and strumming, “The Strangulation Chair” showcasing some of bassist, Alex Webster’s, jaw dropping finger work, “Caged…Contorted”, displaying the fat grooves C.C. are known for, while also featuring some tasty lead-work from Barrett, and “Crucifier Avenged”, with its head thrashing intensity. Even the songs that I initially dismissed as just being typical Corpse began to open up more than I expected, with the more spins that I gave “Torture”.

No one can deny the awesome display of tightness that is found in “Encased in Concrete” and “Torn Through”, or the guitar-work found in “As Deep as the Knife Will Go”, or the shredding solo tradeoffs featured in “Intestinal Crank”, or the pounding grooves of “Rabid”. In fact, a pounding groove can accurately be used to describe damn near every track. The catchiness that C.C. has been able to employ throughout their career is kind of mind blowing. No matter what your opinion of Corpse is, there is little doubt that these guys can wreck your neck, and Torture again proves this.

Choosing Erik Rutan to once again produce seems to have been a wise choice, as the production is sonically fantastic. Splitting the recording between Rutan’s Mana Studios and Sonic Ranch Studios, most likely helped in achieving this well balanced production. Keeping all parties in comfortable surroundings, but not so much where sight of what is trying to be accomplished is lost, is essential to a great sounding record.

The guitars sound superb, catching all the intricate riffing as well as retaining the heft/chunk that death metal should have. I would like to hear Webster’s bass brought up in the mix a tad more, but this is simply a personal opinion. The vocals of George “Corpsegrinder” Fisher are as great as always, with his staple of brutal, seething vehemence captured and mixed terrifically. Fisher’s vocals have stood the test of time very, very well, which cannot be said about former vocalist, Chris Barnes, helping establish the fact the C.C. has always known what is best for them. The drum sound may be the most impressive aspect of the production, achieving a more natural sound than on previous albums. Paul Mazurkiewicz has never been credited with being an outstanding drummer, but truth be told, he is one of the most consistently underrated drummers in all of metal. Knowing when and where to pull back and when to step it up is a problem many metal drummers have, but not Mazurkiewicz. I wish more drummers would understand this (Hate Eternal, I’m looking at you and every drummer you’ve ever had).

I’ve been a fan of Cannibal Corpse since the early ‘90’s. I was one of the die-hards that cried afoul when the band dropped Barnes in ’95 and upon hearing Vile I was also one of the guys to admit that I was wrong and that George Fisher was indeed a better vocalist for the band. I also feel that the band was at its best during the ’96-’98 (Vile/Gallery of Suicide) period. It’s here where the band was able to capture a mix of their older albums while truly applying something newer, faster, and fresher to the fold. Since then it seems C.C. have been on a kind of autopilot. That’s not to say they haven’t continued to progress as musicians or as masters of their instruments, or that any of their albums are bad, because I feel they are all actually quite good. Yet, from 1999 and onward, their albums haven’t had as much of an individual identity to them. Things seemed to change a little with 2006’s Kill and even more so with 2009’s Evisceration Plague, establishing some better distinguished/individual songs. Now with Torture, it seems C.C. has made even more of an attempt, and a better one at that, in achieving or regaining that individual identity.

All in all, I am really impressed with Torture, and I think that Cannibal Corpse have achieved in creating a great album that has already brought me back to more repeated listens than anything that they have done in the last dozen years. Here’s to Cannibal Corpse and the hope that they will continue to do what they are awesomely capable of doing, creating actual songs of catchy, groovy, technical death metal.