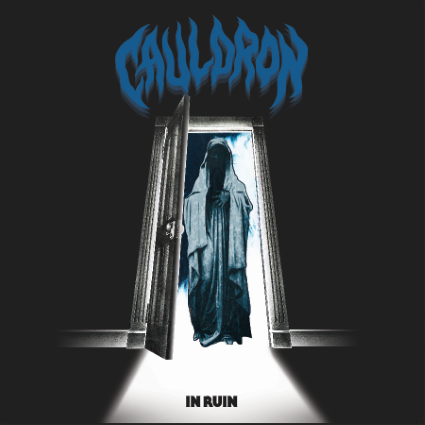 Unless you are birthday boy David Bowie, early January isn’t perhaps the
easiest time to release a record. People are still hungover from New Year’s Eve
or kind of acclimating to another shift in the cosmic calendar. Writer’s are
still relaxing after the mental stress of accumulating their year end lists
and trying to be the coolest. But Cauldron are not daunted by these factors
if new album In Ruin‘s opening cry of “Take no prisoners/feel no pain” is any
indication.

Either way, let’s give them some shine! Pre-order HERE!

Out the same day as Bowie’s rumored to be fantastic Blackstar, In Ruin is also
making sure January is already looking exciting. It may be more on the fringes
of Blue Oyster Cult worship than a K-dot inspired jazz heavy record from a
glam pioneer, but good music is good music. That’s something heading into 2016
we should all agree. We’ve got to support the artists still striving to follow
their muse instead of catering to increasingly narrow confines.

Cauldron prove Canada is currently one of the hotbed’s for good metal, a
welcome relief when I get tired of reading the phrase “6 God”. Their anthemic
“Empress” has you commited to the record fully by the second song. Kind of
like the proto-charge of Amulet on a more consistently Sabbathian tempo kick,
In Ruin is a real winner track to track. The band are even doing a full
Stateside tour with the killer line up of Warbringer, Exmortus and fucking
Enforcer! A nice, diverse bill that celebrates true metal through and through!

I’m especially fond of the sort of laid back and yet hoarse and energized
singing style and Chris Stringer production that is crunchy but slightly old
school yet competitive with the capabilities of today. Highly recommend this
bad boy. Full of little riff moments that will sweep you away, from the
dissonant hooky “Burning At Both Ends” to the quite 80’s big intro and
thematic refrain of “Hold Your Fire”.