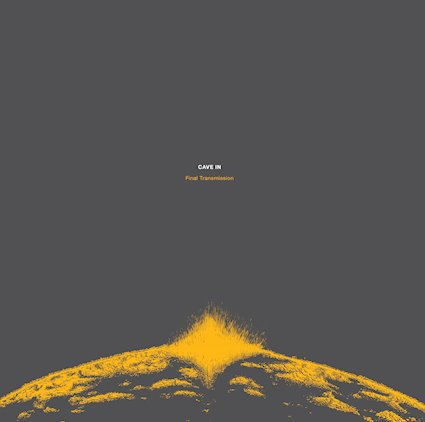 CAVE IN‘s Final Transmission is hands down the best rock album I have heard in 2019, not just a masterful thrill-ride of all the band’s best tendencies forged into a precise and passionate whole, but an extremely emotional and satisfying if completely bittersweet farewell and celebration of Caleb Scofield. It would be a fitting final album for the band if that is what they choose to do, a potent addition to the incredible journey they have taken us on of musical and personal growth.

Caleb was killed in an auto accident in 2018 far too young and left behind a family, friends and legion of fans who he impacted in no uncertain terms. It would clearly be forgivable in the sorrow of such an event to elevate the last artwork of a beloved life out of a sense of protectiveness and love of their spirit, but Final Transmission truly is an incredible album top to bottom and deserves all the praise conceivable. It’s also heartbreaking in addition to the personal loss the world suffered to hear just how fucking amazing the band’s chemistry is, especially when capping the scope of what they have already done – a sizeable and intimidating, beautiful legacy.

I’ve been thrilled since my favorite record from the band Perfect Pitch Black to see them finding an incredible aptitude for not apologizing for any of their disparate elements, from the poppier alternative rock influences to the bristling immense heavy sounds they came up on to the psychic space rock of Jupiter that touched down in the middle of it all. Final Transmission has touchstones of all of those elements but also it is just exciting as can be to hear their drive to explore and let the Cave In-ness of it all just sort of fall into place naturally. “Winter Widow” is a fucking mind melting tune that is like a dream come true for me as a listener – the closest thing I can say to the experience being that it reminds me as if Cave In wrote a Superunknown second half track that would sit somewhere near “4th of July” and “Fresh Tendrils”. The composition, growling bass, divinely fearless guitar textures and some of Steve Brodsky’s best vocal work to date left me with goosebumps and a grateful feeling that someone still gives a fuck about rock in a very disheartening age for the genre.

Most of the lyrics and vocals for Final Transmission weren’t finished until after Caleb’s death. “The song ‘Shake My Blood’ was my first opportunity to express what I was feeling about the whole situation,” Steve explains. “It’s a mix of extreme grief, frustration and anger. I was trying to do something to gain the clearest answer about whatever the next move might be. We worked on the lyrics together, and all three of us sing on that song—Adam’s doing the high harmonies and JR is doing the low harmonies.”

I love the low tuned acoustic kind of clangy intro to the title track that opens the record, the kind of vibe I love to try and create on some of my own more mellow solo Walking Bombs tracks on my personal records – albeit these dudes all smoke me on guitar, haha. It almost sounds like a demo they cleaned up and I was very moved to learn that it was in fact a voice memo with a melodic vocal idea that Caleb left the band at an early stage of the recording process. It is a beautiful intro and VERY hard not to get choked up listening to it. So cool the band included it and it sets the stage perfectly for “All Illusions” grandeur. When those drums come in you know you are in for one of the biggest statements the band has ever made, perhaps even the biggest. This record will make any fan of the band get chills at some point at likely any listen.

“Led To The Wolves” is a fierce album closer and one full of Caleb riffs, just a brutal and bad ass song that hearkens back to some of the thunder of the earliest stuff (albeit with more melodic vocals). It really drives home with a stake through the heart the power of the band and you have to white knuckle yourself through the intensity of it knowing this voyage is reaching an end. Thankfully we will have the music forever and can fucking rage, contemplate or scream or croon along or play air guitar to any song in their history we wish. I really hope new and old fans alike – but especially old fans – take time out to spend with this album this year. It just doesn’t get better than this for 2019 but you will also feel like you are holding the hand of many hardcore scene memories. God bless to all these cats and holy fucking shit, wow. That’s all I got. Go listen. Humbling. One love/pma.