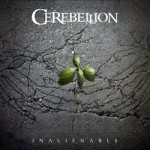 In a genre that is completely saturated with assembly line bands and generic sounds, it is refreshing to come across a talented band that spends more time on their music than their look. Cerebellion are a hard rock/metal band from Orange County, CA comprised of 4 passionate, lifelong musicians who believe in their music as much as anything. Featured in Blabbermouth, ourstage.com, and OC Weekly, Cerebellion are on the cusp of breaking through the wall of unknown into the open field of acclaim and success. Something their new album “Inalienable” is definite to ensure.

The members of Cerebellion take their collection of influences and transform them into an album full of songs devoid of pretentiousness and apologies. “Not The Final Destination” kicks your ass up and the down the street. The Spanish influence on “Undeniable” shines through. Vocalist Joe Arnold belts out passionate lyrics in “Embrace the Imperfection” and “Coexisting.” “Just Under the Surface” shows off the controlled frenzy of drummer Jimmy Schultz. “Breach of Security” is an audio assault that exhibits the talents of guitarist John Arnold and his tasty riffs.

“Inalienable” is a great album lost in a sea of mediocrity. The songwriting and chemistry displayed is a credit to the hours and hours of time each member dedicates to Cerebellion. If a band’s live show is a direct reflection of their relevance, then Cerebellion have a bright future ahead of them. Full of non-stop energy and devotion, a Cerebellion show is a thing of beauty. You haven’t seen anything until you have seen the energy of every member on stage (including the flailing wall of arms and hair that is Jimmy Schultz.)

If you are looking for a band with tattoos, makeup and dumb haircuts, throw a rock in any venue and you’ll hit one. If you want a real band without labels and limits, then Cerebellion is the band you have been waiting for.