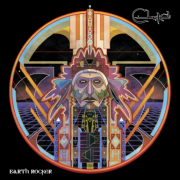 Reteaming with Machine for the first time since BLAST TYRANT paid off big time. Maryland’s finest (and world’s finest live band in my opinion) Clutch have once again made an example of a modern rock n’ roll record that can be held up as current music that will stand the test of time. This is, in my opinion, the most consistent band going, a group who have contributed more to the underground via road dog touring, great personalities and a drive to keep it rooted to true grit. Listen to the assured sing along stomp of “Mr. Freedom” and the explosive Tim Sult soloing to witness pure, refined human chemistry. Clutch may have come as close yet to making a studio record that captures their live electricity.

“Everyone keeps telling’ me, Neil you got to quit your lowdown ways,” croons Neil Fallon on second single “Constant Velocity”. Well, the pure rock fury on hand on this disc, a much faster offering than the excellent and bluesy STRANGE COUSINS FROM THE WEST, should allow for lots of room for low down dirty behavior. The album is like they perfected the thinner, slightly twangy guitar tone of the self-titled Clutch classic platter and just made it much bigger. Dan Maines’ low end is monstrous on here, in perfect lock with the great JP Gaster spring step grooves that make this band so heavy but also danceable. Ass shakin’ puts the people in their seats. Take note, head bangers. The upcoming tour with fellow legends of the stoner path Orange Goblin is not to be missed.

Fallon is on fire as usual, even more riled up than ever. That the band cites Thin Lizzy, Bad Brains and Motorhead as the driving influences behind the album pretty much assures it would be my fave outing from Clutch in awhile (as those are kind all of my other favorite bands besides the Melvins, hahha).  This shit is just pushy and powerful and will ensure a lot of elbows in the pit. “I’m a war monger baby, I got blood in my eyes and I’m looking’ at you,” bellows Fallon in the cowbell heavy groove of album standout “D.C. Sound Attack”. The song does what Clutch does best…takes a simple Clutch groove where you can’t believe a riff so to the point is so damn good and manages to embody the best traditions of hardcore, blues, social commentary and hard rock in one fell swoop.

It is always hard for me to decide what the BEST Clutch album is. That’s so subjective, as they have so many classic slabs. THE ELEPHANT RIDERS, self-titled, TRANSNATIONAL, ROBOT/HIVE…so many good moments to choose from. As soon as I almost decide, then I think about “Red Horse Rainbows” on PURE ROCK FURY or “Immortal” and the mental debate starts again. As a fan of over half my life at this point (and many pints) I gotta say that this is right up there and even better than a lot of the best work they have ever done. I am fucking fairly floored by now and so glad that my favorite band can continue to throw down and bring it so hard. This is how it is done, people. “Oh, Isabella” floats and rolls like a thunder cloud, never letting up.

“Cyborg Bette” is another stand out. You can imagine it literally at half tempo and it would still work as a Cluth song, but the band push the foot tappin’ hard on this disc and set feet on fire. There is a sense of pride and even a little bragging on this album, with random lines about dating the latest supermodel thrown in amidst stabs at crooked politicians, hell hounds and the usual cast of characters you would hope to find on a proper Clutch record. Just thinking about this stuff thrown in with their already huge list of great live songs makes me want to roll my eyes back in my head and whooop!

Throw on the anthemic, wide intro of “The Face” and try not to nod your head to the huge groove (almost reminiscent of something off their great B-Sides collection SLOW HOLE TO CHINA). Nigh impossible. Neil sings about people stealing rock n’ roll and once it’s gone you never get it back. Well, let’s call these guys the defenders of the rock cuz’ they are assuring it aint goin’ nowhere.