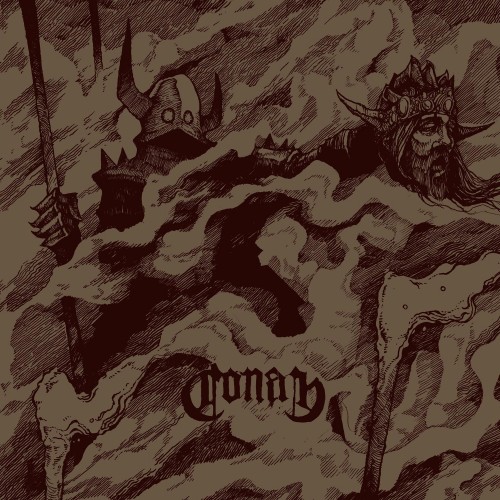 Finally, an avalanche you can nod your head to. UK doom band Conan are back and somehow heavier than ever. This is impressive, since they already are currently pretty much the heaviest band in the world. Imagine early Melvins with a bass tone that sounds like a Valkyrie’s distended anus after a long, drunken bestial weekend in Valhalla with Odin’s Eight legged horse Sleipnir (yet the bass never gets ploppy like bloop blop blub older Korn tone). Like my technical terms? These guys are even heavier than Crowbar is of late. It’s like stupid. You stop and wonder if you really need to be listening to music that feels like it is cracking your ribs and has bellowed, slightly melodic vocals you can’t decipher. Shit is either English, Cave Troll or German. Song names like “Total Conquest” and “Gravity Chasm” pretty much say it all. Conan are the band you put on when you just want your brain wiped in a volano of blood after a long day at the office or when the news is just too shitty to think about any more. It’s all fuzz, guts and monotone riffing with slight tectonic shifts that hurl boulders through the empty space of your white noise hissing mind. Don’t be startled to find more than one song lumber past nine minutes.

Conan are the essence of plodding and can seriously hang on two notes for ages, but it feels like meditation. Most of their records are fairly interchangeable but in the best way. Horseback Battle Hammer, Monnos, Mount Wrath…it don’t matter. These guys are consistent as heck, from one monolithic sludgy track to the next. Their album art is always fantastic barbarian imagery but comes off as way less cheezy and more classic 70’s than many bands who will throw any random viking shit on their cover. This band is more Roadburn material than some watered down ripoff of Amon Amarth, so don’t get it twisted. Also, in case you never heard of a “Blood Eagle”, it is pretty much the most gruesome fucking way to kill anyone ever. Google time, scene kids. The drums on this beast are perfect, thudding and dry with toms that thunder and snare and cymbals that chop heads off. If you live long enough to endure hurling your body agsint the final guitar wal, gutter wail of “Altar Of Grief” you will leave exhausted, scarred yet thouroughly emboldened to fight for metal another day.