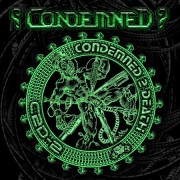 They’re back! And to tell you the truth I never knew they existed, let alone were on a 24 year hiatus. Apparently the Melbourne based Condemned? were the first band to release a CD on Nuclear Blast Records, with their heavily influenced punk meets crossover thrash, going by the name Condemned 2 Death, in 1987. The band went through a few line-up and even band name changes before settling into the incarnation that we have here.

I have always liked the old crossover thrash sound, it had a fierceness that grabbed your attention and a catchiness , usually due to the punk influence, that made you want to jump around and go apeshit. Bands like D.R.I., old Suicidal Tendencies, and Carnivore are what I go for when I clamor for some of that crossover attitude. What’s funny or ironic, your pick, is that Condemned? actually bring to mind those three exact bands, yet they deliver nowhere close to the output of any of the aforementioned bands.

Get the complete review here.

It’s not that “Condemned2Death” is a bad record, it’s just not something that I feel is really needed today. There’s not a lot of bands around anymore that are playing this style and making it work, both in the musical payoff and the literal monetary payoff.  Municipal Waste might be one of the only groups out there right now that can pull off the punk/crossover style so well, and that’s because they simply kick ass. The album kicks off with more of a cap-gun pop than a blast, with two boring tracks in “Big Time Game Hunting” and “Aggressive System”. Thankfully things pick up with what might be the albums best track in the more metal sounding “Thoughts of Equality”. Overall the album is pretty standard fare. There are a few more metal edged pounders in “Emotional Blur” and “Save Thy Brother”, a bit of grinding punk with “Crutch” and “Ocean”, some old school S.T. influence in “Cavern in Mind” and “When Worlds Collide”, and some dull mid-paced crossover in the other five tracks that fill out “Condemned2Death”.

Like I stated earlier, “Condemned2Death”  is not an overall bad album. It’s played well, has a thunderous sound, courtesy of Billy Anderson, and does come off as authentic, or the real deal, so to speak. The problem is that this style has been done better and more convincingly, not only recently but as well as over 20 years ago. So unless you just bleed for anything and everything that is punk-drenched crossover, I would recommend keeping clear of this one.