Album Review: Cro-Mags – ‘In The Beginning’ 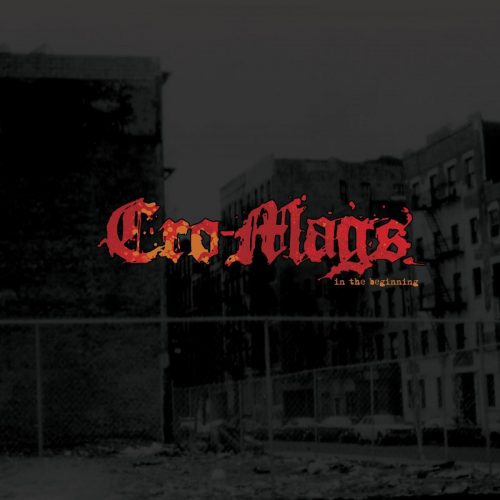 Cro-Mags have one of the more turbulent legacies in hardcore and currently are ripped in half into two bands who each fairly have a serious karmic claim to aspects of the legacy. While Harley Flanagan owns the name now and . Let’s get this straight – In The Beginning is a more than admirable hardcore record full of plenty of aggro, solid moments and pit worthy consistency. To his credit, it is clear Harley didn’t just dial it in at all. He also made sure great people were attached to this era, from Rocky George (who steals the entire show with ease) to Phil Campbell’s cameo energy. Gabby also kicked a lot of ass. It sounds great mix wise and the performances range from on point to totally killer.

On the album’s artwork, Flanagan explains, “The front of the album is my old building I used to live in, called ‘C Squat’ where I wrote most of the music for 1986’s Age Of Quarrel album. The rear of the record shows me looking down at the site where the building once stood, essentially, it’s me looking at my past and where everything began.” I love the LES and C Squat makes me think of getting heroin spritzed out a needle up my literal nostril and then seeing Choking Victim in the basement while people urinated down an orange traffic cone. Damn, my life is somewhat different now.

The title of the record is honestly a big distraction for me, seeming like less of a PMA statement and more a troll reminder of who founded the band (although I am not tone policing dude on the things he is cynical about). It also is because I am a huge Mercyful Fate fan and The Beginning is a compilation album released in 1987 consisting of the Nuns Have No Fun EP and different versions of 4 tracks from the album Melissa. I know it is nitpicky and corny to note that and that neither this album or The Beginning are the most imaginative titles, but I don’t like thinking of other art when I am trying to concentrate on what is in front of me.

“PTSD” is a standout track, just about anything you might want in a Cro-Mags song present. That is good and bad. “Don’t Give In”, while also kicking ass, has almost the exact same development from a classic pace-setting slower intro to a growling, faster remainder. It is good but kind of makes you want to just listen to “We Gotta Know”. Or does it? Am I biased because Cro-Mags have a smaller discography than The Ramones? Plenty of Ramones songs sound similar and I love them all. Lots of elbow swinging, two-stepping mid tempo classic reminiscent moments to experience are present (or re-experience if you are an old fan) in a new chapter here.

While there is power in a lot of this, it also feels like an homage to bygone days. Still, he has way more of a right to that than half the new jack bands copying actual old school artists personal creative contributions and aesthetics but then acting as if they are hotter shit. No. Your new school band will never be Cro-Mags, Judge or Chain Of Strength. Stay motivated and do your thing, but don’t get it fuckin’ twisted and pay your respects, kids. “No One’s Victim” has some cool dissonance for the intro that I liked, before setting up an elbow swinging march sprinkled with mandatory lead guitar widdlies.

I guess I will just come out and say it. John Joseph and Mackie Jayson on board as well would have made this so much more fucking awesome. Harley did an admirable, great job holding the vocals but he isn’t a frontman and singer like John. The songs are cool but would’ve been cooler. Mackie is untouchably good. No contest. You can’t expect people to just forget knife fights and court shit or whatever you believe, but after the triumphant majority of Misfits (don’t forget poor Googy) and Guns N’ Roses (sans Stradlin) reunions of recent times, it is impossible to hear this and not also notice the missing elements in the room unless you are cave man headbanging so hard it doesn’t matter. One love and pma to all of these people, all of whom have profoundly influenced my life. It just makes me sad.

Listening to the strong closer “There Was A Time” (also a song name on Chinese Democracy, ha) I think this record is overwhelmingly well meaning and has a ton of real energy to it. I would never want to take away from that. It is admirable Harley went so hard and wrote so many songs for this, not ceding an inch of passion. Along with the new Body Count record, it is great to hear vets of the scene still give their all and not lose their beliefs. Sometimes survival is about being thankful for the good aspects and reality of the situation we have, not what we wish was different. In that paradigm, let’s be thankful we can still hear any of these musicians at all and support whichever version of the band (or both) and try and keep ahead of our collective societal demons, y’all.