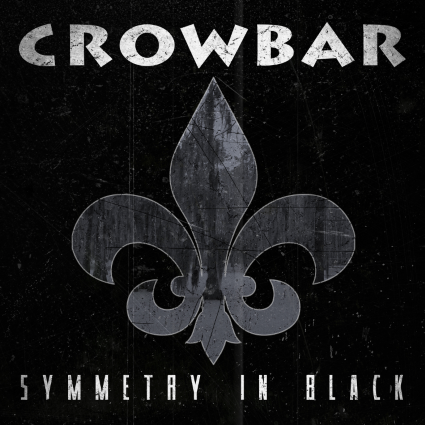 When word came that Kirk Windstein was exiting sludge megalords Down, I was bummed. Still, I’d rather have a Kirk-less Down (even though he was my favorite member) if it means we still have Crowbar. Underrated for years and finally getting the respect their awesome array of super heavy albums deserves, Crowbar are one of the ultimate metal bands to me. Symmetry In Black shows Windstein celebrating the 25th year of Crowbar with an album that can proudly match any of his best achievements. Opener “Walk With Knowledge Wisely” seems to continue on the themes of learning from the past that were so prevalent on Sever the Wicked Hand, the previous monster Crowbar release. “Put an end to what poisons you,” insists the remorseless vocal. And the 3:20 mark has one of the best riffs in the Crowbar universe, which is saying something.

Kirk couldn’t tour as much as Down needed to without risking his health, but the band are doing fine without him as their new material (especially “Steeple”) blessedly revealed. You can have C.O.C. without Pepper Keenan (though I miss his vocals), but there is no Crowbar without Kirk.

“Symmetry In White” is classic sounding, a huge and painful intro riff raping the mind with sabbath glory before the clanking bass behemoth tones of Jeff Golden collapse the sky. The song features the well known eerie melodic Kirk vocal style (as opposed to fat barking bulldog) on the verses, before a skull punching chorus roars home. Crowbar are one of the only bands I always want more of. “Symbolic Suicide” is a tribute to Peter Steele with a big fat circle pit down-tuned riff that Carnivore fans would eat up, a track that will make you love heavy metal in that special way. Much of this record reminds me production and material-wise of Lifesblood for The Downtrodden, perhaps my favorite overall Crowbar release. The material is a bit heavier than Sever, though that album had some brilliant shit on it like “Liquid Sky and Cold Black Earth” or especially “Let Me Mourn” (one of the most powerful metal tunes I have ever heard about loss). Symmetry is Kirk really focusing full force on Crowbar, though…and it really shows. The production is big but the distortion is super ugly. Sooo good.

“Teach the Blind to See” finds Windstein growling lyrics that could serve for a summary of his endless quest to keep real metal alive in the hearts of the new and old fans.”I’ll lead you to the truth. So many years. So many words.”

The record dissects misery but sides with faith and strength as a way to find new life. Kirk always inspires me in the way Kigdom of Sorrow bandmate and hatebreed kingpin Jasta does lyrically, acknowledging strife but building bricks of emotional fortitude you can lean on as foundation when shit gets you down.

“The Piety of Self-Loathing”, a discordant Odd Fellows Rest-esque warped and spacey dirge, weighs you down like a dwarf star but makes you want to shed all the dross and flex your back muscles, shrugging off the weight of the world or atleast not letting it buckle you. The instrumental is gorgeous, plodding and huger than fuck. This is the kind of shit I want played at my funeral. So much feeling you can’t even begin to bottle it. Crowbar demand to be heard with a deafening sound. Amen, brothers.