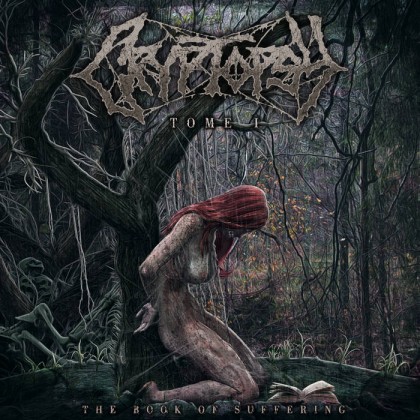 Cryptopsy‘s The Book of Suffering Tome 1 should put the veteran Canadian’s back to the higher tier they deserve in the death metal world. The first in a series of EPs, it completely kicks your ass and exhausts but leaves you panting for more evil. Pre-order HERE.

These days “technical death metal” means precise widdly widdly and oddball arrangements to some rather than complex, relentless attack ala Cannibal or Aeon. I’d put proper Cryptopsy in the latter category, a band at their best when having fun writing arrangements unselfconciously but still pushing themselves to get as crazy as can be. People give them shit for The Unspoken King because it was a deathcore departure, but what’s funny is how few people notice how much the death metal side of Whitechapel’s This Is Exile, for example, sounded like it really wanted to be Cryptopsy at certain points. I don’t think a band should be punished for expanding their style anyway. Sure, a classic sounding doom album like Crypt Sermon’s latest Out Of The Garden nails a certain style and is above the doom pack this year due to killer performances such as “The Master’s Bouquet”, but if everyone always adhered to only certain forms we would have nothing but genre boundaries and no innovation.

So, The Book of Suffering. Definitely on the more classic Cryptopsy sound-side but full of thrills and some twists anyway.

For some reason the title has me thinking of Hermann Hesse’s “genius of suffering” Steppenwolf (a must read for anyone, let alone metal fans, haha). A treatise on spiritual loneliness and the moral shades of embracing the wolf within, the book often mentions Buddha.

“A man who can understand Buddha and has an intuition of the heaven and hell of humanity ought not to live in a world ruled by “common sense” and democracy and bourgeois standards. It is only from cowardice that he lives in it…and refuses to see that the wolf is as often as not the best part of him.”

This literary excerpt made me wonder if Hesse  was saying to abandon the moral compass or that it requires a very certain type of person to let go and not be penned in. Sometimes people like that are straight up sociopaths though it is even stronger to realize in a spiritual way that even suffering will pass and thus can be overcome (even in death we are set free). Or that it can’t destroy a certain integrity inside us and thus you should follow creative dreams, for example, even at the risk of being a heavy metal outcast. We grasp at ways to not suffer in life but they often create more. Desires, ego, validation or just plain chemical release…these have often been themes in death metal. Usually however death metal glories in inflicting suffering on others or examines the darkness of that false freedom.

Anyway, all philosophy aside, the Jason Suecof mix is fucking dynamite. Bass, guitars and gory vocals sound precise but beefy, drums loud and cracking but the guitars not squashed flat and thus impactful. You can still feel the heavy parts in your shoulders and gut even as leads sound fluid.

The “suffering” of the record title is really felt in the bound and left for dead disturbing, lonely art and especially in the dry throat ripped out
vocal performance of Matt McGachy. This is the release where McGachy truly comes into his own and proves his “era” of Cryptopsy has arrived. It helps additionally that the material is fuckin’ A ok. This is a pure adrenaline spike.

“Halothane Glow” is phenomenal, everything the band excel at in one song. I feel like it is a great bridge song for older and
newer fans, full of meaty groove, rapid fire attack drums that don’t relent, soul-torn vocals that are more intense than any deathcore gurgle and a few moments that almost sound as fearlessly dedicated to groove, albeit in a much more death metal manner, as classic Pantera. Then the song ends in a mystical, yawning wash of void space before the made for headbanging intro to “Framed By Blood” grabs hold, particularly notable for some snazzy Olivier Pinard bass diddling that unifies with an overlapping guitar riff.

Yes, the final track “Framed by Blood” is (intentionally?) 4:20 of Cryptopsy letting go and just bringing it with no regrets. From sizzling leads over a massively motivating slower riff to guitar lines that could kickstart a pit for Lamb of God to Morbid Angel fans in equal measure, to again definitive “death metal” performances from Flo Mounier and Matt McGachy, you are left bludgeoned and yet invigorated, as contrarily numb and awake in every pore as true death metal should make you feel.