Album Review: Dark Castle – “Surrender To All Life Beyond Form” 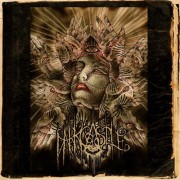 Dark Castle is a duo consisting of singer/guitarist Stevie Floyd and drummer Rob Shaffer and as it was the case with their 2009 debut album “Spirited Migration,” their new album “Surrender To All Life Beyond Form” seems more the making of some crazed doomsday cult than a duo from Florida. Dark Castle is all about the exploration of musical space, rather than traditional track-after-track linearity. It is baffling how so much sound is generated with a line-up as shaved down as Floyd and Shaffer’s.

The first half of “Surrender To All Life Beyond Form” completely resonates with the title (and the project) of the album. Dark Castle presents their listener with a chaotic and violent body of music alternating between simple, brutal and slow guitar riffs in the vein of 90’s sludge, and complicated prog rock-like melody lines supported by a wall of percussion which very rarely yields to the urge to take the easy way out and just play straight up 4/4. Complexity and overly ambitious song structure can quickly come around and bite you in the ass, but Dark Castle manage to balance out their astrological inclinations with a healthy connection to Earth. Underneath the layers of manic sound, Dark Castle rely on solid, catchy riffs to keep everything together.

That being said, “Surrender To All Life Beyond Form” does peak early on. After the half-way interlude “Heavy Eyes,” it seems that surrendering to formlessness begins to take its toll on the album. “Spirit Ritual” is mainly omnious chanting with some atmospheric electronics in the background, and the following “To Hide Is To Die,” kicks off an unruly attempt at electro based industrial which more or less comes out sounding like Daft Punk in a bad mood. Part of the problem is the length of “Surrender To All Life Beyond Form”. It’s simply too compact for a piece of music that relies so heavily on the effect of spatially defined droning as a mood-setter. Clocking in at 34 minutes “Surrender To All Life Beyond Form” never really takes off completely and that’s a real shame. As the final track “Learning To Unlearn” rings out, the album leaves the listener with a sense of having been hurried through a disturbing and horrifying exhibit of monstrous sound, which sadly is too short and too ambitious to make a lasting impression.