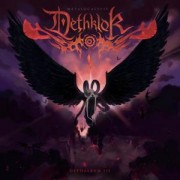 Getting an early look at these songs was very entertaining . A few I knew, and the others were fun hunting for. You’ll find the track listing below with corresponding episodes.

Four great songs came out before the album, including a music video that finds Dethklok in a space showdown with nemesis, the X2P1158 Drum Machine, in The Galaxy. That song really embodies the massive movements of Black Fire Upon Us and Go Into The Water. Impeach God follows in the same big, dramatic suit. Looking for an instant spike in heart rate? Killstrado Abominate and Andromeda both kick like a new defibrillator. In the show, they still have one song left to write for the album that will repel the world’s impending doom.

Bottom line, buy this album to save the world, or we will all be meeting a storm bigger than Scrambles the Death-Dealer soon.