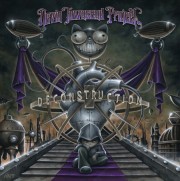 Two years ago year, Devin Townsend released the first two albums in a series known as “Ki” (also the name of the first album) that would create a multi-lateral narrative ending in the heaviest album he has ever made and the most subtle and calming album he’s ever made. While the calmest album entitled Ghost was recorded third, it was only done so to let Townsend unleash all of his metal energy into Deconstruction, the album we’re here to review. Technically the third piece of the puzzle, Deconstruction takes us through the madhouse of ideas that is coming to grips with sobriety, ego, and cheeseburgers. Yes, cheeseburgers.

“Praise the Lowered” is a six-minute opener that slides an innocuously innocent intro into the retrovirus that is Deconstruct. Ever so slowly, Devin evolves this airy tone into something powerful and beastly. The soft lyrics mixed with produced synth and drum patterns feel ethereal.  The mood swifts about halfway into the track, when the calm and collected Townsend battles with being calm and sober, eventually bursting through the speakers with “GIMMIE THAT WINE/GIMME THAT ACID/I WANNA LOSE EVERYTHING THAT’S POLICING US/THEN EVERYTHING MUST BEGIN/I WANNA DO HEROIN/I WANNA DO CRACK COCAINE” The wise mentor present in Ki, the recovered user in Addicted, and the spiritual Sensei in Ghost have been challenged by the destructive id Townsend unleashes in Deconstruction. The lyrics tell the story, but it’s the layering of drum beats with guitar loops that drive this point beyond home.

The end of this track floats into “Stand,” which gives Townsend the space to show off his guitar gifts and guttural growls. Opeth’s Mike Akerfeldt helps out on the latter (although the former would have been nice) and adds barbaric screams that rival his own work, constantly adding a booming severity to Townsend’s sometimes over-the-top vocal approach. Strapping Young Lad fans will easily enjoy this album the most of the quadrilogy, and “Stand” might be the perfect way to get someone into DTP that hasn’t started yet.  Emperor’s vocalist Ihsahn echoes that in the next track “Juular,” which reaches some fairly black metal high points, including some riveting drumming and operatic backing vocals. This all gets sliced into pieces when Townsend flips on his insanity switch and then getting right back into the swing of the song. Few musicians have this man’s sense of timing and level of execution, and “Juulan” is a perfect example of that. How he mixes neo-circus muzak with blast beats and Emperor vocals is beyond me, but it works.

The two longest songs on the album are probably the best, which is rare for masterful progressive music. The idea of stringing multiple threads and acts into a single song is impressive, but few actually strike the right balance and tend to sprint when the pacing of a musical marathon is required. “Planet of the Apes” clocks in at almost 11 minutes, while “The Mighty Masturbator” is a whopping 16 minutes. “Apes” sees Townsend reflecting on the nature of being man and his relationship with money, God, and Meshuggah. This is the band’s finest point, musically, as they stream together a fantastic force that keeps this metal tanker afloat. Often times the sheer speed of the drums and keys seems like a blurring warp while Townsend croons. Tommy Rogers (of Between the Buried and Me) lends his charming vocals and gruesome growls to the song and really does make a difference, unlike the majority of Greg Puciato’s (Dillinger Escape Plan) contribution on the “The Mighty Masturbator.”

The last three songs see Townsend step into the Between the Buried and Me arena of long songs with time signatures and style changes after (nearly) every eight lines. The title track “Deconstruction” weaves in and out of storytelling and shredding, with Fredrik Thordendal of Messhugah fame handling the axework. This is where the cheeseburger concept comes into play, where the main character in the story is expounding the characteristics of a cheeseburger in an attempt to quantify and control. It sounds insane but it’s ultimately a larger statement about the motivations and shallow aspects of this character. The music keeps up with the fun, as some of the guitar parts reach a Bucketheadian level of precision and robotic speed.

The “character” Devin chooses here is crucial to your understanding of the album (and Townsend as a whole), as this isn’t what he thinks, personally, but the steps the “character” of the album is taking toward understanding and bullshitting himself. The egotism of intelligence is expressed thusly: “These are only equations, this is only a problem!” Townsend’s take on life through the lens of this alter-ego is humbling and revealing. The lyrical matter is sometimes brushed off by fans, but there is something to each and every line he writes, no matter how absurd it sounds. For those that complained of the lack of pure insanity in prior releases, you will be pleased from the onset. Others that simply want to see Townsend do more with the time and space to be completely creative, this album is as pure as it possible.