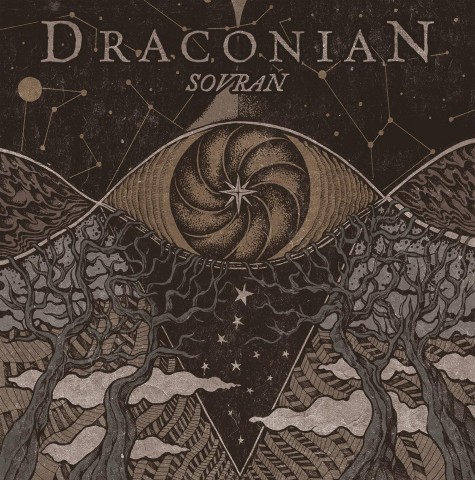 Along with Paradise Lost’s fantastic The Plague Within, this has been a victorious year for gloom and doom. Sweden’s veteran beauty and the beast doomers Draconian have made a masterful new record Sovran (pre-order HERE!) that has had fans counting down the days. Pleased to report it should exhalt the group to new heights in the scene, a real modern victory. The My Dying Bride and older Katatonia comparisons might still rear up hear and there, but the band are also their own and deserve a look without comparative filters.

“Heavy Lies The Crown” alone as a single would have critics gushing, myself included. Thankfully we have nine songs nearly as glorious and dark, like spilled wine and hopes running through the fingers and down a pale arm as it drops a glass mixed with poison. No song is below the six minute mark, though each is like a movie unto itself yet adding to this whole experience. “The Marriage of Attaris” has a bold poetic monologue intro before the simply soul stirring voice of Heike Langhans. Heike really asserts herself subtly and beautifully on this record and should be more than embraced by longtime fans at this point. Anders Jacobsson retains a growl that sounds truly fierce and lonely yet strong, while the band’s relentless forward marching doom is as natural as wood rotting in the forest or dark growth and shadow reclaiming a scorched Earth.

“Stellar Tombs” opens with a confident charge before settling into a melancholic, watery verse while “Dusk Mariner” is a true mid record highlight, opening with sustained guitar notes that easilly bring to mind a vast sea at night. Chioreanu Constin (Arcturus, Primordial, At The Gates , Arch Enemy) did the cover art to this amaing record and also helps set the brooding tone visually.Of course I am also biased to like the band because I love their name as a long time Dragonlance roleplaying fan, haha…though of course the word Draconian could also describe a totalitarian society and not just a hybrid dragon/human warrior.

Only a little fat trimming would improve on an otherwise pretty flawless example of mood, performance and the interplay of shadow and light.

Can’t go wrong with this one. Really one of 2015’s outstanding moments.