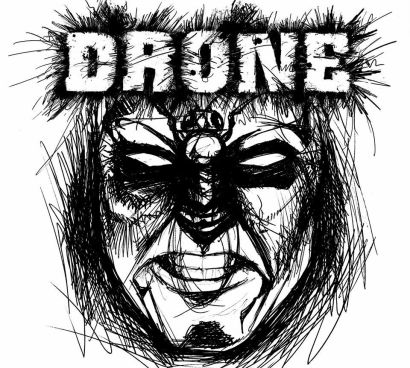 Drone‘s servicably solid new S/T album from Metalville is a meritable scream thrasher to look into if you need some more headbanging moments before year’s end. It is interesting in that the band sound like they mainly draw from early 00’s influences (the start of “Guilt” reminds strongly of mid-period As I Lay Dying) combined with sort of Chaos A.D.-era groove thrash. The clean vocals aren’t really vital, but they are executed honestly and with pride instead of being faked in the studio with sugary effects. The German’s started rocking in 2004 and ten years later they are like a machine. Some stuff is political but then the next song will talk about short skirts, so it is a little schizophrenic lyrically (kind of like how on Snoop Dogg’s R&G (Rhythm & Gangsta) he’d have a song about going to Church or loving his kids and the next song is “Fresh Pair Of Panties On” or “Can U Control Yo Hoe” featuring Soopafly. I used to love playing that loud driving slowly through Provincetown ). But anyway, Snoop and Drone both are multi-faceted. “Hammered, fucked & boozed” might be irreverant but it is a major party roller with some red hot punk riffing thrown in. Black Label fans will like the groove riff in the “All in, it’s time to go for broke” section of the song, a part that could have found room amidst the stompers on Order Of The Black.

The best part of this release is the artwork from Till Zettelmeier and Jonathan Stenger, illustrators who peppered the booklet with comic book-ish rather simply rendered figures alive with personality. Kind of like early Image comics type art with a dash of Sin City influence thrown in (so think a more super-heroic Jim Lee’s Deathblow, haha). Strong point in a nutshell? Drone’s are a big looming mental issue these days but this Drone will keep you hapilly distracted and rocking but also invested in the real world. “Into Darkness” anchors the record as soon as things are starting to get a tad confusing, sort of re-kickstarting the feeling that this band’s coherence is in their mutual shared energy rather than one style, though it is all metal and mainly thrash. “Into Darkness” also has the best lead section and sort of Lamb of God-esque bridge on the album. “Beatbox Within” is about the heart beat, so that’s different.  It was meant to be played live. “Hung & Over” is suddenly a hysterical kind of ballad about waking up who the fuck knows where. It leans on the 80’s for inspiration and proves that if this abnd toured with Hammercult the venues would exlode with silly insanity. But then the song ends with a real sense of feeling that is moving, a crazy feat to pull off! This album is a thrasher but also a grower. Gwar fans, check out “Rock ‘N’ Rollercoaster” for a sense of movement the (2x the beefcake these days) aliens would probably approve of. Megadeth or Prong are other obvious touchstones in the precise syncopation and gruff vocals on “How We Suffer”, which has the best drum performance on the record.