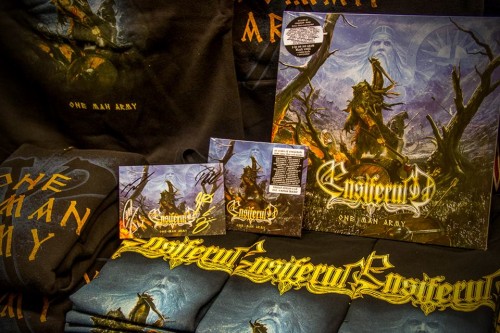 Ensiferum‘s One Man Army is a melodic folk metal fan’s delight if you don’t mind higher end production with still gritty sounding guitar. That said, there is still a raw and very real attack to the material. Think at times of a trace of
Slaughter Of The Soul sped up through symphonic Helsinki bombast and warcry screams mixed with folk metal. A thirst for history, warmetal and spirited endeavors will be quenched but an at times thin guitar sound but you’ll also experience a lot more variety in material and even genre as the record progresses through epic to speed to folky dreams.

“Axe Of Judgement” gets things off to a determined gallop after the intro mood setter “March Of War”. Ensiferum play a lot of their strengths right on “Axe…” with a short but lightning lead, seeming black metal influence and speed paired with epic metal touches. “Heathen Horde” is one of the best songs from the band yet and would surely appeal to fans of Hammerfall or Turisas, easilly. The mid section quiet “traditional” part of the song is glorious while the drums thunder beneath spoken shouts and a riff that’d make Estonia’s Metsatoll jealous. Man, I’d kill to see those two live. “Lady Of The Slain” by Tyr comes to mind asanother recent battle field epic that kindles the spark of heroism in the heart of the epic metal fan in a similar way.

The title track is indeed the most sweeping statement on the record, Huge and
unabashed choral group melodies against the stark screams and a feeling like
you truly are in some story of yesteryear, facing down all the odds. Campy to
some but to other metal fans, deeply rousing. There’s the feeling of
prevailing over any adversity. Also, the music video (BELOW) is stunning and a triumph in itself.

“Burden Of The Fallen” is like a calm return home or a respite, the quest
momentarilly paused amidst camraderie, remembering what you stand for with
friends and reflecting on those lost. The music is a beautiful if short ballad
of battlefield thanks. This calm sets up the powerful opening riff of “Warrior
Without A War”. While the galloping “woaah” drenched riff before the grim
vocals might offput some, I thought it was cool and classic. Also a real big
fan of the string arrangements in this song, which seem to dance over soaring
peaks. When you think they might be drifting here and there you find good
twists and turns like the opening somber group vocals of “Cry For The Earth
Bounds.” I’m writing this on a rainy day in Upstate, NY and the voices are
really coming to life in the soft gray light. Then the big, brass augmented
verse appeals to both the Skalmold and even Darkane fan in me. There is also
some serious piano work in this song and traditional intruments really finding
flourish. The level of finger skill is impressive and the female vocal of “lay
down and sleep” will entrance to eternities of rest.

Then the scream of “Cry For The Earth Bounds” shatters the spell to anguish
for the land’s essence.

The record is a good addition to the older catalogue that fans ought to
appreciate.”Two of Spades” is a thunderous charging rocker that will produce
moshing live, I’d bet. It is almost bordeline Motorhead at times but through
the crazy Ensiferum sound treatment. Love this one. Fucking sticks with you
and the bridge rocks your pants off. There’s even a weird ass funk part with
whistling and grunts to enrage some heavy metal fans, but it is completely
amazing and one of the most daring wins for the record.

“My Ancestor’s Blood” is a more serious affair, as the title might suggest. It
punches in like towers collapsing or emerging from the Earth. Ensiferum are
cool in that the songs have dark parts but upswings in melodic guitar lines as
well that create momentum for the axe to swing. Just like life there are highs
and lows. “Will I yield my life forever?,” the song asks with resolve.

“Descendants, Defiance, Domination” is more watery and spacious, a track on
One Man Army that adds significant depth and we really start to undeniably
see, if listening from the beggining of the record, that this is a very
memorable release with a lot of dynamics. Fans of even more Power Metal stuff
will enjoy this song the most after the intro changes into something
Queensryche or Stratovarius fans could enjoy.

“Neito Pohjolan” has a train on the way drum beat Johnny Cash fans might
cotton to, another surprise on this record with non-English vocals and very
well performed harmonies set against the lead vocal. It ends the record before
the bonus tracks kick in (4 more tracks, but I’ll let you describe those
yourself). I prefer the record ending here, a firm and tight grouping of songs
and a clear ending for the record as accordion, breathy feminine voice and
folk instruments. Another win for the Helsinki band that carries you on
through the dark.