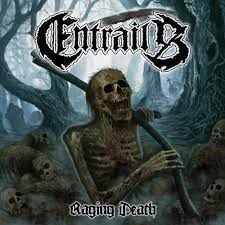 Buy it…I mean really, just go buy it…I did. Honestly, what more could I really say, other than telling you of the fact that I went to my local music store and threw down my own, hard-earned money. That is how good Entrails and their third album, Raging Death, are – worthy of your hard-earned money good.

If you’ve ever had a love for anything about the old-school Swedish death metal scene, or even just a slight inkling or curiosity, then you will definitely enjoy Raging Death. The follow-up to 2011’s The Tomb Awaits, finds Entrails proving, once again, that they are indeed the real deal and not just a retro movement rehash.

Get the rest of the non-rehash details here.

Whether it’s the nice ‘90’s flavored intro and chunky grooves of opener “In Pieces”, the subtle Dismember worshipping melodies of “Carved to the Bone”, the bludgeoning of “Bloodhammer”, the in your face anthems of “Defleshed” and “Headless Death”, or the extremely catchy rhythms and creepy vibe of “The Cemetery Horrors”, these mighty Swedes simply know how to crush. With a bombastic production by the band themselves, and mixed and mastered by the legendary Dan Swano, Raging Death is one hell of an awesome listen, showcasing some of the best aspects of the Swedish elite, with just a touch of Kam Lee/”They Rise” fronted Denial Fiend.

The material on Raging Death may not be groundbreaking, and some would call it highly unoriginal, though I would severely argue that point. Entrails’ guitarist/ main man Jimmy Lundqvist originally founded the band in 1991, and all of their 2010 debut, half of the aforementioned The Tomb Awaits, and even a tad bit of Raging Death culls from songs and riffs originally penned between ’91 and ’94. In fact, if Entrails would have released their three full-length albums back when they had begun, they would be heralded just as high as Entombed, Dismember, Grave, and Unleashed. Just the fact that they can be mentioned in the same breath as the aforementioned today, is something quite remarkable in itself and something to be proud of.