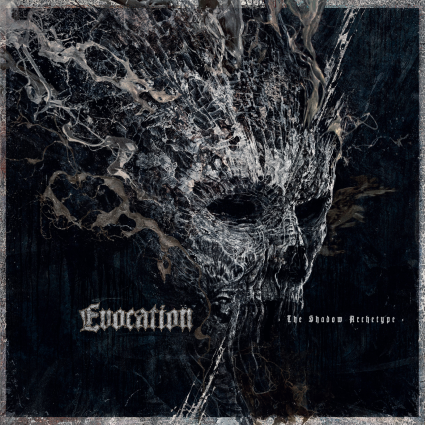 Losing some important members didn’t stop Evocation from keeping their power intact on newest effort The Shadow Archetype. This is exactly the type of record I want from Metal Blade. I’m not saying everything they put out needs to be this subgenre of metal, but the quality level is as firm as steel. The unmistakable earmarks of Swedish metal are displayed proudly, but not to a fault. “Modus Operandi” could argue head to head with recent At The Gates but has a dirtier feel that gives the band their own punch.

Fans of heavier Paradise Lost, Entombed, The Haunted or Unleashed who somehow aren’t hip to Evocation already (which is doubtful), this record will burst your britches. You’ll feel like you just met an old friend but with all new songs full of interesting arrangements that don’t overstay their welcome. The writing is concise but energized, like focused attacks rather than a long drawn out flailing.

“Children Of Stone” is a highlight, Thomas Josefsson commanding vocally over a chugging sonic battlefield of mid tempo fury. It is four tracks in and preceded by strong material, but this is sort of the point in the album where (to use a mosh metaphor) the floor opens up and the show really starts. You’re warmed up and can’t contain yourself anymore.

There is a very cool blend of older, impactful death metal brutality colliding with moments of more technical stuff from Simon Exner. The old school bludgeoning wins out overall, which makes sense for this band. Still, it is cool they are spreading their wings a bit but not jumping the shark to follow trends. “Blind Obediance” features some beautiful classical style playing to break things up and is followed by the barrage of perhaps the most violent song on the album, “Survival of The Sickest.” That song almost reminds me of early Entombed if covered by Hatesphere, a really interesting racket. You almost want the band to take more risks some places but also don’t want to spoil a very good thing.

“The Coroner” also bears mentioning, hard charging melodeth like Wolfheart but with a bit more of a Left Hand Path influence than Slaughter Of The Soul to the low end. The pause at 1:14 is super brief but such a perfect dead stop that it sets up the monster solo and mosh section that follows ideally.

A worthy effort any metal band could be proud of.