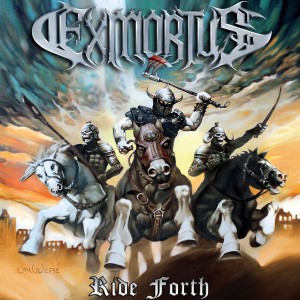 Exmortus return with Ride Forth, another powerful team up between the band and Prosthetic Records. From a razor edged cover of Beethoven’s “Apassionata” that would make The Great Kat and Bill & Ted of Wyld Stallyns proud to rugged and rowdy thrash originals with grimy yowls that invigorate with the same battle hardened intensity you’d expect from Skeletonwitch or the much missed crimson screams of early 3 Inches Of Blood.

“Black Sails” is a mid paced march that really stands out, the band a single entity of undeniable dueling guitars, melodic veined fiery runs and drumming that pumps you up and holds things together. Exmortus always get me charged up and wanting to go jog up a mountain. “For The Horde” is one of the fastest tunes from the group yet, a lightning blur of guitars that swipe like the downward killing stroke of a vorpal blade. It’s easy to envision the ramparts, just sayin’.

“Let Us Roam” is another favorite, the band really allowing themselves to cut loose with the shred but with an emphasis on cool songwriting arrangements and strong vocal engagement that deifies the grasp of some tech death bands, for example. Perhaps it is the thrashier influence at the heart of these also very classic heavy metal influenced tunes that invigorates rather than the distraction that comes with tech death in knowing that you could be listening to classic old school death metal and it would probably be better (though I love some tech stuff like Revocation and Fallujah bigtime). “Fire and Ice” gives Evile a run for their money with a very Metallica-tastic intro before a super medieval tinged gallop ensues, just an epic metal treat for fans of this stuff.

Verdict is once again Exmortus fans shall behold triumph.