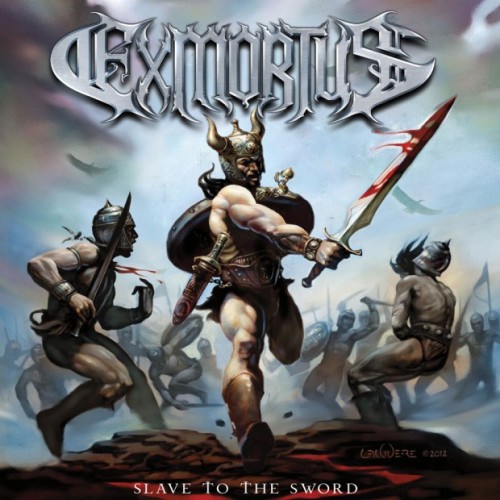 In case readers of a site called Metal Riot needed reminding, metal is king. Exmortus are back to cement the message into your skull with one foot on your chest, one hand throwing horns and the other hand dancing across frets. This is music to shake the foundations. While the Cali thrash band manage to create a great racket on Slave To The Sword, they aren’t reinventing the wheel. This is battle metal gruff vocals married to some Maiden gallop and some brilliant guitar solo wizardry. Simply put, this is metal for metal’s sake. Exmortus are keeping alive the ancient (several decades old, haha) traditions of heavy metal while enjoying themselves immensely. There is nothing here as groundbreaking as, for example, Prosthetic labelmate’s Shining’s black jazz rebellion (sure to offend any elderly neighbors or my roommate who loves dance music), but Exmortus still matter. Does it really harm the world to have another great thrash band? Of course not! It makes life better!

“Warrior Of The Night” arrives midway through this repeat listenable shred platter and is an easy standout of brightly toned note flexing power. The song exemplifies everything right about Exmortus, with grit and skill very evident. The band make sure the album inspires you to headbang all throughout and it is very easy to keep the thing on and not skip tracks. The vocals are somewhat reminiscent of Skeletonwitch, though with more emphasis on warriors than the general darkness that infests most of that band’s material. Fans of everything from Revocation to Untimely Demise will love Exmortus.

I was reading the opening of Robert Jordan’s final Wheel of Time co-authored entry A Memory of Light and the hardened sounds of this band really lent itself to the images of a weary battle commander Talmanes stumbling around as his wounds infested with a suckli, cursed darkness from a blade rancid with evil. Exmortus are not in any sense going to shock you, but they certainly make good metal. I bet the band is honestly much better live, because this energy is sure to adrenalize, though that is not meant as a slight to the record. They do throw in a cover of “Moonlight Sonata” that would make classical shredstress The Great Kat proud enough to not enslave them, so that’s cool.

Bottom line: Exmortus are ones to watch and show tons of promise. Even if they just crank out lots of good, foundational thrash with a sprinkling of technical brilliance on top like this for the rest of their careers, the world can always use more solid metal to serve as a bulwark to the crap. I just bought a physical copy of Against Me!’s Transgender Dysphoria Blues finally today and still find it so fucking moving and probably the most important punk record in years, but not every album needs to tackle social issues. It is also good to sometimes have some shit in your colection to just get you fired up, break antiques or make you want to surf for weird goblin porn.