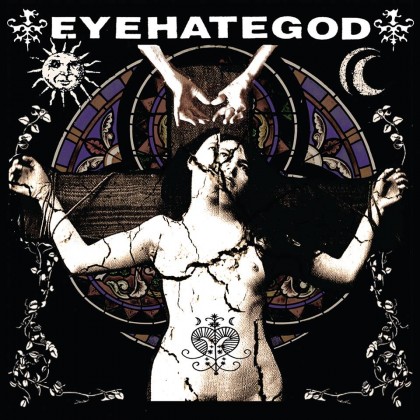 The new self titled monster from Eyehategod is pretty much precisely what you’d expect, sludgy ass swamp music from hell with vocals that sound like shredded flesh ground between broken bottles and a boot heel. If there is one thing this band is, it is consistent musically. Long stretches of feedback, nihilistic and satirical song titles, confrontational imagery exposing the hypocrisy of religious hate…it’s all there. All of their albums are pretty much equally as good, with the songs almost coming in second place to the overall mood or aesthetic experience. Nonetheless, they will pummel you raw. Opener “Agitation! Propaganda!” starts things off in a faster mode but soon we are knee deep in southern mud with brain bleeders like “Nobody told Me” or the standout and awesomely titled “Trying to Crack the Hard Dollar”, a song that will make your neck and shoulders tense up.

“Quitter’s Offensive” is a shuffling downcast scrapper that sounds like stumbling down the street wasted. EHG are masters of taking blues roots and bastardizing them into the most gutter pain doom referencing punk metal imaginable. There is a reason crust punks and metalheads alike give them props in a way few bands except for Motorhead and Crass or maybe Napalm Death receive. It’s a testament to the band’s iron will and cockroach survival sense…even after the unexpected death of drummer Joey LaCaze. Joey’s final drum tracks are on this record and it gives me chills to think about. Shit, I found his cell phone number from an old interview in my phone awhile back and it was heavy.

“Worthless Rescue” starts with that vintage EHG feedback you know and love, before their 118th nasty riff takes you south. “Medicine Noose”, “Parish Motel Sickness” or “Robitussin and Rejection”, the titles say it all. Mike iX is a poet of the downtrodden and disenchanted, even when you can’t understand a fucking word he is saying. But really, the guy is like a prophetic force. See them live at the moment on tour with Ringworm and the explosive newcomers Enabler.

Props to Phil Anselmo for recording this at his studio Nodferatu’s Lair and subsequently releasing this on Housecore, really the truest home for EHG these days. While it isn’t my favorite release from the band (that would be the unfuckwithable Dopesick or perhaps Confedaracy of Ruined Lives…always a toss up), the new S/T record is proof Eyehategod haven’t lost a drop of anti-social bile.

EHG still toe the line between Sabbath and Flag ripped up in a blender or NOLA crime, addiction, poverty and devil blues. Like all their records. you almost have to be a masochist to make it all the way through…but in a good way. Some bands suck so bad it hurts to hear their album, but with EYehategod you just have to wonder if you can soak up that much negativity in one sitting. It’s like binge watching The Walking Dead and then trying to have a happy day.”The Age Of Bootcamp” is an absolute workout of exhausting dirge, with Jimmy Bower and Brian Patton creating a juggernaut of slow tempo mental collapse that pushes the album to a tremendous close as we sink into oblivion together.