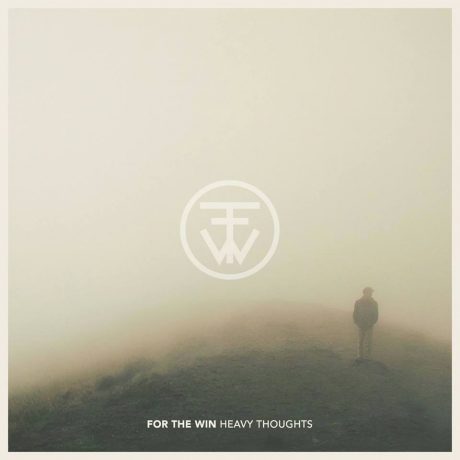 “Give me a reason why I should stay.” “This is a song for the beaten and broken”. “You took everything from me.” “I’ll keep pushing on.” None of these are exactly original sentiments for an easycore record. That said, For The Win are good enough at what they do and if you are into this lighter cousin of metalcore you prob are more concerned with the general vibe, singing along and moshing to relatable riffs and themes than having the lyrics be on the Mars Volta end of the spectrum. Still, as the San Diego based band – newly signed to Victory – moves forward through their new record Heavy Thoughts, the moments of passion and clear conviction are pulled down by a lot of cliche. That said, I am sure this will do fine with scene kids. It isn’t on par with Homesick by ADTR but at least while you are listening to it the album is decent. It just doesn’t stick with you afterwards.

Don’t think I am being a hater. There are some very enjoyable melodic threads wound around the heart of these riffs, like a lighter Parkway Drive with more unabashedly giant pop hooks over the verses and breakdowns. “G Series” and the almost Foo Fighters-esque intro to “Nowhere To Run” might not break the mold but you’ll be humming along one way or another. Kyle Christensen is a very capable vocalist who just happens to sound like tons of stuff that has come before and the band throw in too many one note chug breakdowns that are the epitome of lowest common denominator. Like, they make some Bury Your Dead breakdowns look like rocket science.

I was recently watching Phil Anselmo & The Illegals cover “A New Level” with Rex Brown sitting in on bass from Download 2014. The riffs are signature no matter who plays them, and not just because they are from such a gigantic hit metal record. The parts are just memorable! Even when Dickelback covered “Sad But True” you can’t help but sing the main riff afterwards.  Or, say, the intro riff to Dagnasty’s classic “Circles”. It’s just undeniable, one of the best punk songs ever no matter which vocalist. In my opinion too many younger punk scene bands might be having fun but the commercial ambition tends to squash a lot of bands into a similar vein. It’s not bad music but it doesn’t grab with the intensity of risks paying off.

Like Homesick, the album ends with a high school heart strings radio emo ballad. The most telling number though, and also maybe the best song, is the fast kind of Jimmy Eats World sounding “All Or Nothing”, which is basically also what you will take away from this band. You’ll either love it or never care if you hear any of it again. With the country plagued by social horrors and scandal daily, we kind of need the punk of the world to be more like Downtown Boys, Oak and Le Butcherettes right now a lot more than more of this style that has been glutting the arteries of the scene since the early 00’s. Like, we get it.

More On: Metalcore, Album Review, For The Win, Victory Records
share on: